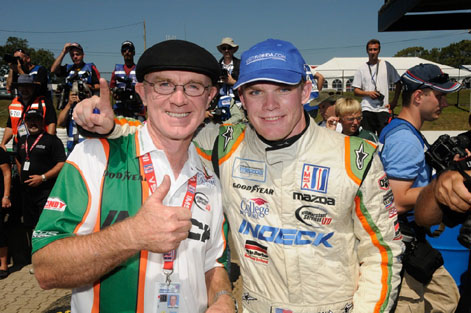 Q: Congratulations on your deals both sides of the pond; what are the expectations from your first season in European racing?

A: Thank you! It will be a very competitive and tough season for me. I expect to learn as much as I possibly can as quick as I can! Being with Carlin has been fantastic for me so far because they’re a very experienced team. I hope to score points consistently and be there in the 2nd half of the season to score podiums. But the overall goal will be to learn as much as possible.

A: GP3 was the best opportunity for my supporters and I. The fact that all the races are with F1 is hard to ignore. It’s got a great TV package for Europe as well. It just all fit together right!

Q: You are going from a rotary engine to turbo power; will this be a major challenge?

A: Fortunately, the turbo is not very big so there isn’t a lot of lag to deal with but it definitely is different. I will have to learn how to perfect using it throughout the season. 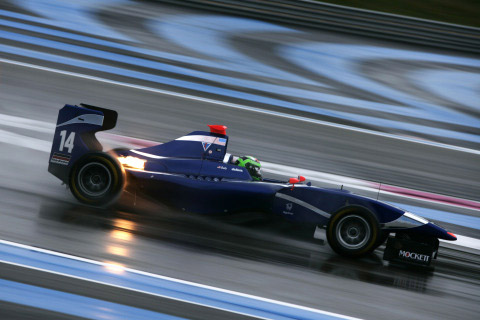 Q: Alexander Rossi and Josef Newgarden raced in GP3 last season; have you asked them for some feedback on European racing culture?

A: Alex and Josef did really well for America last year and they’re great drivers! Josef is now my teammate in Indy Lights this year so I have been able to ask him a lot about GP3. Alex was also able to tell me a lot about GP3 the last time I saw him so they’ve definitely been helpful!

Q: Your schedule on the American shores is all road races with Sam Schmidt Motorsports, any reason for no oval outings?

A: The Indy Lights races I’m doing are the only ones that don’t conflict with GP3 race weekends. Bryan Clausen will be driving my car on the ovals this year as part of the Mazda Road to Indy program. I hope to be able to do the Freedom 100 though this year but we’re struggling to find the funding.

Q: You have tested both GP3 and Indy Lights machines, please describe their characteristics?

A: The cars are very different. The Indy Lights car has a lot of horsepower which is always good! The GP3 car has a lot of downforce and is a very high tech machine. They both have their ups and downs like every race car but I enjoy driving them both.

Q: What was the secret of your championship success last year in Star Mazda, seven wins and 12 podium appearances from 13 race starts, compared to a single victory in rookie season the year before?

A: My Star Mazda season was very memorable thanks to my team, Juncos Racing! They really gave me all I needed to succeed. They are fully dedicated to winning and all the guys on the team love what they do. I learned a lot from my first season in the Mazda’s and it helped me a lot during the 2010 season.

Q: You won races on oval, street course, Laguna Seca and the fabulous Road America; which victory stands out as the most memorable?

A: The best win of the season came in my hometown of Indianapolis! It was the night before the 500 at O’Reilly Raceway Park and it was the first ever ‘car’ race I was able to do in my hometown. I had a lot of friends and family there and it was just an awesome night.

Q: Last year in New Jersey you were robbed of history making fifth consecutive victory by a bad call from officials for jumping the start, how long you took to get over it?

A: It was an unfortunate situation for sure but to be honest I had a great race and learned more coming through the field than I would have had I led the whole race.

Q: At the Canadian Grand Prix last year you picked up a new sponsor, please tell us how this relationship was forged?

A: Indeed I did! It was great to meet a lot of people at the Canadian GP and I was fortunate enough to meet some very passionate American F1 fans. I met Sunny Smith from Callcap in the F1 pitlane one of the days and he had seen me speak at a Grand Prix Tours event the day before. We just began talking and the rest is history! He is a great guy and it’s always nice to find someone who wants to help an American make it to F1!

Q: You will be racing at some magical F1 venues like Silverstone, Nürburgring, Spa and Monza. Victory at which of these tracks would be the sweetest?

A: I actually can’t believe I will be racing at all the tracks I’ve dreamed about racing on! The one I’m looking forward to most is Spa. Winning there would be pretty fantastic! But I will take a win anywhere possible!

Q: With all the Atlantic crossings during the season have you looked into which airline has the best Frequent Flyer program apart from Aer Lingus?

A: Haha, I will definitely be all set up with the best frequent flyer programs available! We have to take advantage of that!

Stay tuned to F1 Weekly to track the progress of Daly Express.

Greetings and racing regards from Cali.