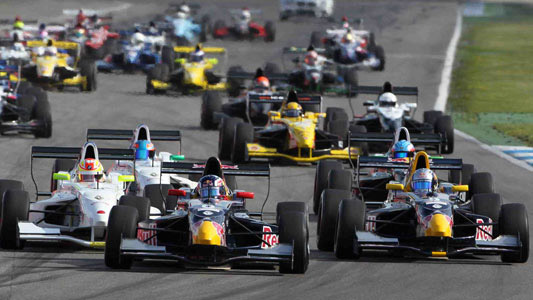 The Battle Royale that is expected in the Formula Renault Euro Cup this season, between Carlos Sainz Jr of Spain and Dutch driver Robin Frijns, had its first encounter in the opening race of its NEC version, North European Countries, last weekend at Hockenheimring.

All three races of the weekend were won by Red Bull young chargers. Russian star Daniel Kvyat won the opening race with Frijns hot on his heels in second place, and setting the fastest lap of the race in process. Sainz Jr was third two seconds behind the Dutchman.

Sainz Jr stamped his authority on rest of the weekend, winning both race 2 and 3 and also recording the fastest lap for both events. Frijns was second in the second race and Kvyat was third.

In the third and final race of the weekend Sainz Jr triumphed over Belgian driver Stoffel Vandoorne, who placed second. Frinjs, who is with Josef Kaufmann Racing of Germany, was third.