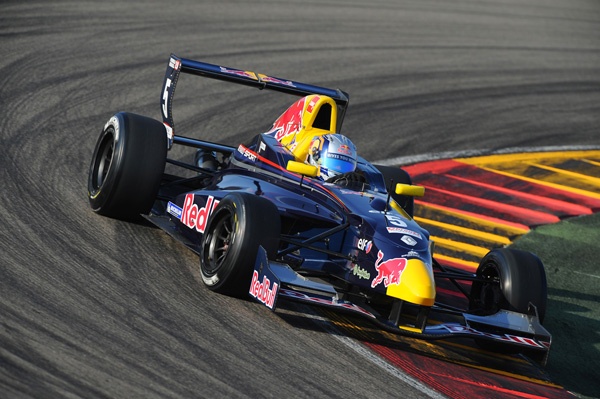 At the end of action-packed race, Carlos Sainz Junior (Koiranen Motorsport) took his first race victory in Eurocup Formula Renault 2.0 here at Motorland Aragón, on the back of a solid performance. After having got the upper hand over Robin Frijns (Josef Kaufmann Racing), the 16-year old Spaniard took advantage of Will Stevens (Fortec Motorsport) abandoning whilst out front to take over the lead of the race. Carlos Sainz Jr. shares the first podium of this season with Robin Frijns and Alex Riberas (Epic Racing).

On Saturday morning, the thirty-four drivers competing in Eurocup Formula Renault 2.0 were split into two groups. Will Stevens, starting in group A, put in the fastest lap to take the first pole position of the year by just a few tenths of a second, thus securing his first ever pole position in Eurocup Formula Renault 2.0. The fastest in group B, despite a technical fault at the end of the session, Carlos Sainz Jr. took up his place on the front row alongside the British driver from Fortec Motorsport.

In front of an already quite significant crowd, the first start of the season was pretty chaotic to say the least. Will Stevens made it cleanly into the first bend in the lead, but in the thick of the main field several cars were involved in a coming together, forcing the safety car to be called out immediately. Javier Tarancon (Tech 1 Racing), Daniil Kvyat (Koiranen Motorsport), Joni Wiman (Koiranen Motorsport), Timmy Hansen (Interwetten.com Junior Team), Karl Oscar Liiv (MP Motorsport), Pieter Schothorst (R-Ace Grand Prix) and Stoffel Vandoorne (KTR) all found themselves out of the race.

The safety car stayed out for three laps. At the restart, Will Stevens was the driver out front ahead of Robin Frijns, Carlos Sainz Jr., Alex Riberas and Mathieu Jaminet (Josef Kaufmann Racing). In the space of a few laps, these five drivers pulled clear of the rest of the field. In sixth, Oscar Andrés Tunjo (Josef Kaufmann Racing) was leading the chasing group with Felix Serralés (Fortec Motorsport) and Côme Ledogar (R-Ace Grand Prix) on his tail.

Will Stevens took advantage of the battle between Robin Frijns and Carlos Sainz Jr. to build a lead of a few car lengths. On lap six, Carlos Sainz Jr. got the better of Robin Frijns and moved up to second, pulling off a really spectacular move at the end of the long straight here at Motorland Aragón. His second position immediately turned into a first place, as the car of the leader Will Stevens ground to a halt because of a fuel pressure problem.

Now in the lead ahead of Robin Frijns and Alex Riberas, Carlos Sainz Jr. pushed hard right to the finish to win the first race of the and take his first every victory in Eurocup Formula Renault 2.0. At 16 years of age, the Red Bull Junior Team driver thus takes control of the overall standings.

Carlos Sainz Jr.: “The weekend got off to a bad start, but with this victory I can put all that behind me. We had some problems in free practice but my team worked fast and well. The race wasn’t easy, you had to stay focussed. What went on between Robin and myself was all fairplay and was quite entertaining. I took some risks and today it paid off. I was a bit quicker than him in a straight line, so I took advantage of that. It’s the perfect way to start the season.”

Robin Frijns: “Up until this race, nothing had really been going the way we wanted it to this weekend. My team is just getting to know this category and the same goes for me too. We didn’t perform quite as well Carlos Sainz Jr. He took advantage of his better speed on the straight to get past me fair and square. Now we are going to work to try and close the gap tomorrow.”

Alex Riberas: ”Today was Epic Racing’s first race and it’s the ideal way to start with a podium finish. I got off to a good start, then I set a good pace out there but I simply wasn’t able to go faster than the leaders. Now we have to analyse why that was and do everything to make sure we catch them tomorrow.”