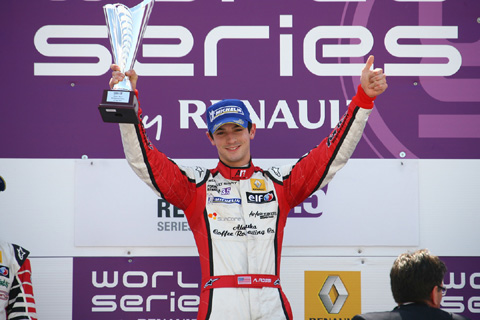 This opening race of the season in Formula Renault 3.5 Series had it all: Suspense, passing manœuvres and comebacks. The rookie Alexander Rossi (Fortec Motorsport) took his chance to shine and take his first victory in the category. The American crossed the finish line ahead of Robert Wickens (Carlin) and Nelson Panciatici (KMP Racing). All of which can only bode well for the season ahead!

As we have now come to expect, Saturday is the day when the light aerodynamic configuration is used. The first qualifying session of the year was a thrilling one, with twenty-two drivers all within the space of a second. Robert Wickens claimed the first pole position of the season, after a hard-fought battle with Alexander Rossi. With a lap in 1’42’’901, the Canadian posted the fastest ever time ever recorded in qualifying at Motorland Aragón, making the Formula Renault 3.5 Series the fastest category to have run at the circuit.

Robert Wickens got off to a flyer, but ran wide in the first bend. Starting from the second row, Daniil Move took advantage of the mistake. The Russian thus took control at the front of the race ahead of Alexander Rossi, Robert Wickens, Kevin Korjus (Tech 1 Racing) and Albert Costa (Epic Racing). In the main field, Anton Nebilitskiy (KMP Racing) came into contact with Arthur Pic (Tech 1 Racing) and was thrown into a roll. The two drivers escaped unharmed, but the safety car was nevertheless called out to allow the two stricken cars to be cleared from the track.

After four laps behind the safety car, the restart was given with Daniil Move retaining his first place ahead of Alexander Rossi and Robert Wickens. Alexander Rossi was however looming very large in Daniil Move’s mirrors, while Kevin Korjus ran wide. The winner of the 2010 Eurocup Formula Renault 2.0 title was passed by Albert Costa, Nelson Panciatici then Walter Grubmuller (P1 Motorsport).

Daniil Move was holding firm under the constant attacks from Alexander Rossi, who was himself coming under threat from Robert Wickens. Albert Costa, having shaken off Kevin Korjus, took advantage to regain contact with the lead trio. The battle between these four, with Nelson Panciatici lying in wait ready to pounce, went on for several laps. Meanwhile, the crowd were holding their breath in suspense and on lap 11 Alexander Rossi finally found a way through at the end of the pit straight. This put the American out front, with twenty minutes of the race to run, ahead of Daniil Move, Robert Wickens and Albert Costa. Costa himself was passed on the next lap as the result of an incisive move from Nelson Panciatici.

Once out front, Alexander Rossi pulled away unrelentlessly. Behind him, Robert Wickens finally got the upper hand over Daniil Move to move up into second. Daniil Move slipped back several places as a result of the move as Nelson Panciatici and Albert Costa took their opportunity to get past. The lead four then remained unchanged until the finish. Daniil Move finally finished in fifth, just ahead of Jean-Éric Vergne (Carlin), who started from back in 15th place.

Alexander Rossi: ”My start wasn’t ideal, so I have to work on that. After the Safety Car peeled off, I attacked Daniil Move several times, but he didn’t make any mistakes. I finally found a way through in the pitlane straight by making sure I was where I needed to be. It was a close call with the pit boards, but I knew they would get out of the way! I then opened out a gap and everything went well from there. I didn’t necessarily expect to win my first race quite so soon.”

Robert Wickens: ”I made an error from the start. I braked a bit late, expected a bit more grip than there turned out to be and ran wide. I then bided my time waiting for the right moment behind Daniil and Alexander. We were very close and anything could have happened. In all, it was quite a frustrating race as I felt I had the right setup to win.”

Nelson Panciatici: “After starting from sixth, I didn’t think I was going to make it onto the podium. It’s a very good result. It’s a perfect start for me working together with KMP Racing and confirms the good form we’ve been showing since the start of the weekend.”