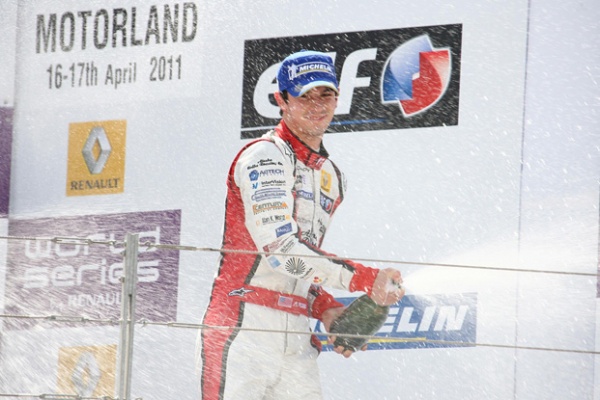 After a difficult qualifying session this morning, where Rossi struggled with traffic and building heat into his tyres, Rossi lined his Fortec Motorsport car up in P8 on the grid.

Rossi made a great start, keeping on the inside of the main straight and moved up into P6 as he headed into turn one. He was immediately up close behind fifth placed Wickens and began looking for a way past.

Over the next eight laps Rossi continued to push hard and was consistently less than 0.5 seconds behind the fifth placed driver. On lap eight the team made the strategic call to bring Rossi in for an early pitstop which the team executed perfectly, bringing Rossi out in P11.

Once released from the pit lane and in clean air, Rossi pushed hard on cold tyres leapfrogging a number of cars during the pitstop intervals and gaining valuable track position. Regularly going two tenths quicker than everyone else on the track, Rossi’s spectacular lap times included one which broke the circuit’s lap record.

The combination of the team’s well executed pitstop strategy and Rossi’s flying laps meant that after everyone had stopped for fresh tyres he was running in an impressive P2.

Rossi’s focus then moved to closing the gap behind race leader Korjus who was 1.4 seconds ahead. The two drivers spent the next seven laps trading fastest lap times. Their lightning pace meant they were lapping six tenths quicker than anyone else on track.

The two cars were well matched for pace, and with Rossi struggling with slight oversteer, it made it difficult for Rossi to bring the gap down any further. After 25 laps, Rossi took the chequered flag in P2, just 1.7 seconds behind Korjus, and picked up a further 18 Championship points.

“It’s been a dream start to the season with a 1st and 2nd”, Rossi commented. “I had a tough morning qualifying but knew I had a good car for the race and could challenge for a win from the 4th row. My aim was to overtake as many cars into the first corner and then it was a case of pushing as hard as possible during the pitstop window to make up track position, and it worked.”

“I want to say I big thank you to everyone at Fortec Motorsport for all the work they’ve put in so far. The car is fantastic to drive and there is a lot of work that goes on behind the scenes by the guys in the team. It really is a privilege to work with them, they are amazing and I feel like family here,” Rossi continued. “We now look ahead to the next Spa in two weeks. I go there as Championship leader, but it’s a long season and there is a lot of work to do. We must stay focused and continue doing the best job we can.”

“What another fantastic day for Alexander and the team! We walk away leading the team and driver’s Championship and I really can’t ask for more than that! Alexander did a tremendaous job and it’s clear that the whole team is working really well together. We now head to Spa where we will have the best garage due to our Championship position which will be an advantage for pitstop strategy, and we have every confidence that Alexander will have another strong weekend;” commented Jamie Dye, Team Manager, Fortec Motorsport.

Alexander Rossi heads to Spa Francorchamps on 30th April for rounds three and four of the World Series by Renault leading the Championship with 43 points.

Race recap with Clark and Steve.