Robert Wickens wins from pole at Spa-Francorchamps. He also started the season opener at Aragon from pole position.

After grabbing his second consecutive pole position the Canadian commented, “Our car was exceptional and it’s great to have two Carlin drivers in the top three. I was behind Jean-Eric and I took advantage of his slipstream especially in sector three. It’s another pole for me and now I have to turn it into a victory.”

Wickens led the 22-lap race from start to finish beating French teammate Vergne by 2.694s. Spaniard Albert Costa started from the front row and was third man on the podium for Epic Racing.

Brendon Hartley, like Wickens once part of Red Bull programme, was fourth for his new employer Gravity-Charouz.

Race winner from round one, American Alexander Rossi, was seventh for Fortec Motorsport and will start Sunday’s reverse grid race from front row.

Daniel Ricciardo was tenth for Czech Red Bull supported ISR Team. The Australian missed the season opener due to his F1 reserve driver duties in Shanghai.

Greetings and racing regards from Raidillon. 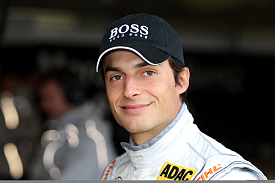 More Canada on top. Bruno Spengler will start Sunday’s DTM season opener from pole in his Mercedes. Mattias “Nascar Swede” Ekstrom shares the front row in his Audi. Ralf Schumacher in his Mercedes is third on the grid.

The pole for Portuguese Moto GP was claimed by Jorge Lorenzo, his first of the season. The man from Mallorca will be looking for four-in-a-row at Estoril on Sunday.