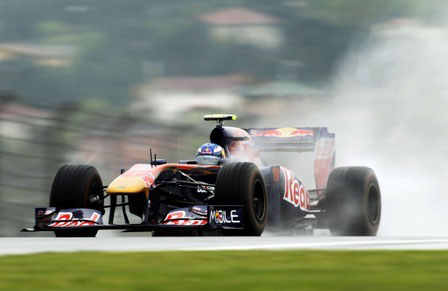 Storm brewing at Toro Rosso. Red Bull’s policy of giving and clipping wings may claim another victim before the 2011 season is over. Their Bull-evard of Broken Dreams is well travelled; Christian Klien, Scott Speed, Vitantonio Liuzzi and Sebastien Bourdais.

And that is just from the Barber of F1-ville. A look down the feeder series show victims ranging from a Kiwi to a Canadian. Brendon Hartley, Mirko Bortolotti and Robert Wickens – all championship winning drivers – have been shown the emergency exit faster than a New York minute.

The clock may now be ticking in Perth, Western Australia. They are already a day ahead, and so is their local boy, Daniel Ricciardo.

Ricciardo is now on the famous Red Bull fast track performance. Last Friday he enjoyed his fourth outing at an official Formula 1 event. He had the same feeling last November when he took part and went very quick in post-season testing at Yas Marina circuit in Abu Dhabi.

In Istanbul Ricciardo recorded eighth fastest time while the past and current legends of German motorsports went off-track. Crucially, and even more important, Ricciardo’s time was just ahead of Toro Rosso’s current driver Sebastien Buemi.

It is hard to imagine that both Toro Rosso drivers, Jaime Alguersuari and Buemi, will see a third season in Faenza. These are the same people who once declared ‘we are not running an F1 kindergarten here.’

Alguersuari, who compared his entry into F1 sans testing like ‘going to the slaughterhouse,’ did provide a championship winning season for Red Bull in British F3, beating then Red Bull colleague Brendon Hartley.

Buemi, on the other hand, played second fiddle to fellow Swiss (now French) driver Romain Grosjean, in both F3 Euro Series and GP2.

Red Bull may decide at the end of this season to let one Australian go as Mark Webber’s contract expires this year, and bring in another, Ricciardo.

The mood of Dr Marko will again determine the fate of a young driver.