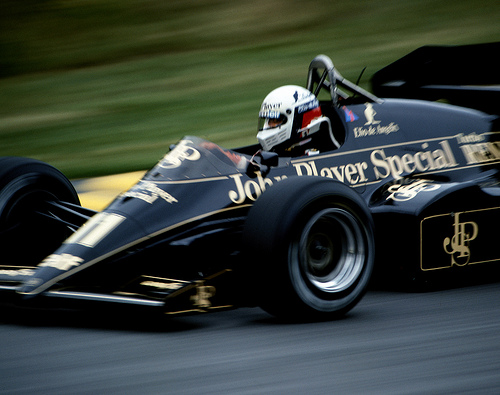 Clark and Steve on the Spanish Grand Prix.

De Angelis was killed on May 15, 1986 in a high speed testing accident at Paul Ricard, while testing Gordon Murrays low slung Brabham BT 55. Like Francois Cevert he was a well trained pianist, fast driver and generally well liked in the piranha pool that is Formula 1.

Elio was born in Rome on March 26th 1958, his father, Giulio, owned a large construction company in Rome and was active in power boat racing. Elio’s karting career was brief but quick. His raw talent and speed mated with family money brought him straight into Formula 3.

He won his third ever motor race and won the Italian F3 championship in his rookie year over Piercarlo Ghinzani.

In 1978 he raced in Formula 2 and also won the prestigious Monaco F3 race. In his third year of racing Elio was in Formula 1.

He made his debut in Argentina with Shadow team and was one place shy, in seventh, to score a point in his first F1 race.

He moved to Lotus in 1980 and scored his first podium finish in Brazil, which would be only podium for the season. Elio would spend another five years at Lotus. His day of days came in Austria, 1982, at the very fast Osterreichring, where he held off a hard charging Keke Rosberg in one of the closest finishes in Formula 1 history. Elio’s first Grand Prix win was the last in the lifetime of team owner Colin Chapman.

His best F1 season was 1984; winless but 11 top five finishes helped him to third place championship behind the McLaren drivers, Niki Lauda and Alain Prost. The 1985 season he would finish 5th in the championship on the strength of 10 top five finishes – the record book also shows him as winner of the San Marino Grand Prix at Imola, this happened after race winner Alain Prost was disqualified for an underweight car.

Elio, who survived Nigel Mansell at Lotus, was not happy at what he would call Peter Warr dancing around new teammate, a driver by the name of Ayrton Senna, and left what he felt was no longer his team to join fellow Italian Riccardo Patrese at Brabham.

And it was Patrese who was to test the BMW turbo powered car after the 1986 Monaco Grand Prix. But Elio, after three successive retirements in races, requested Patrese if he could do the testing at Paul Ricard.

Tragically, the rear wing came off and the Brabham left the track at high speed. The car turned upside down and caught fire. Elio was not badly hurt but was trapped and could not get out. Alan Jones and Keke Rosberg tried in vain to help Elio. Since it was a test session, medical and safety facilities were bare minimum. Elio lated died in hospital, lack of oxygen was the primary cause of his death. This was a needless death, much like the Ronnie Peterson situation at Monza in 1978.

www.eliodeangelis.info and the video of his Austrian victory is also highly recommended.