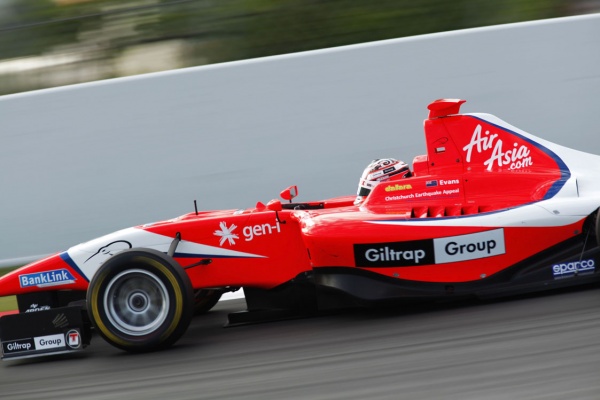 Mitch Evans put in a storming lap to snatch pole position in a closely fought battle during qualifying at Circuit de Catalunya.

Andrea Caldarelli looked to have pole wrapped up for Tech 1 Racing early on in the session. The Italian went top of the time sheets, and the rest of the thirty strong field struggled to match his pace. Early on Lotus ART’s James Calado, Jenzer Motorsport’s Nico Muller and Status Grand Prix’s Alexander Sims all challenged at the front but Caldarelli was sitting pretty.

During the second half of the session the battled really heated up. Yesterday’s quickest man, Valtteri Bottas briefly took the top spot, before Atech CRS GP’s Marlon Stockinger edged him out. But Caldarelli was quick to respond moving ahead of the Filipino driver. Caldarelli pounded in quick laps, and had the session under control, until fellow rookie Evans found his groove. With just minutes left on the clock the 16-year-old put together the perfect lap to move ahead, and despite pushing hard Caldarelli could not find the extra time he needed – Evans snatched the first ever pole position for MW Arden by just 0.001 seconds.

Stockinger held onto third position to give Atech CRS GP its best qualifying result to date, and Aaro Vainio ended the session with his best ever performance in fourth for Tech 1 Racing. James Calado was the top Lotus ART driver in fifth, and race winner Nigel Melker was in sixth. Müller had one final push but was unable to better his time and remained in seventh ahead of Pal Kiss, Dean Smith and Bottas in tenth.

Once again the competition down the grid was extremely competitive and just one second covered the top twenty-four drivers. The scene is set once again for another exciting race this afternoon.