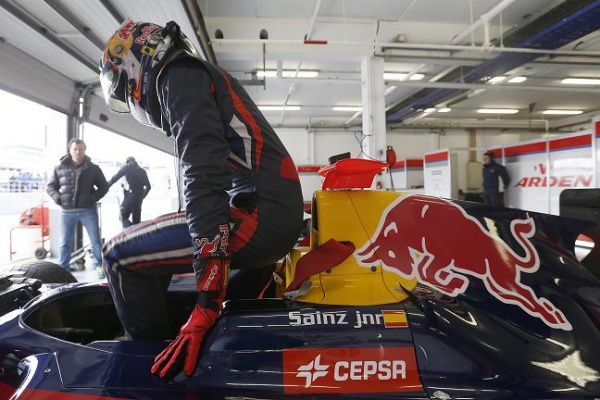 MW Arden rookie Carlos Sainz Jnr fastest in first pre-season GP3 test
Carlos Sainz Jr made it two out of two after posting the best laptime for the second day in succession with David Fumanelli (Trident) who was fastest in the morning session. It was another trouble-free day with the GP3/13 car with 833 laps covered in Estoril by the full grid of 27 drivers.
After a very successful opening day of testing with the second generation car, day two of the pre-season test at Circuito Estoril got underway on a wet track after heavy rain early in the morning. Strong winds made for difficult conditions as the drivers continued to learn about the new machine.
Koiranen GP’s duo Aaro Vainio and Kevin Korjus were first to set the pace until fastest man from yesterday morning, Tio Ellinas (Marussia Manor Racing) topped the timesheets. There were several brief interruptions with red flags after spins for Ethan Ringel (Bamboo Engineering), Facu Regalia (ART Grand Prix), Jimmy Eriksson (Status Grand Prix) and Patrick Kujala (Koiranen GP) as they dealt with the slippery track.
With an hour remaining of the morning session, the track began to dry as the drivers ventured onto slicks. Carlin’s Nick Yelloly went P1, with plenty of action occurring as the Jenzer Motorsport pairing of Patric Niederhauser and Alex Fontana clocked first and second on the timings. The final five minutes saw Fumanelli steal the show with a best laptime of 1:29.428. At the close of the morning test the top ten finished as Fumanelli, Niederhauser, Fontana, Lewis Williamson (Bamboo Engineering), Daniil Kvyat (MW Arden), Vainio, Ellinas, Conor Daly (ART Grand Prix), Adderly Fong (Status Grand Prix) and Jack Harvey (ART Grand Prix).
The sun shined upon the Estoril track for the afternoon session as the winds got up, with Koiranen GP’s Korjus heading the times from Ellinas and Giovanni Venturini (Trident) after one hour. There were two changes to the afternoon line-up with Melville McKee taking over from Adderly Fong at Status Grand Prix and Ryan Cullen replacing Lewis Williamson in the Bamboo Engineering car.
At the midway point Ellinas reclaimed the top of the standings, as the rain clouds began menacingly moving in. With thirty minutes remaining Daly rose to P1 a tenth quicker than the Cypriot before the session had a short halt to proceedings when Samin Gomez (Jenzer Motorsport) spun. Fifteen minutes to go and it was Sainz Jr who rose to the top four tenths faster than the American with a 1:27.6 whilst Venturini and Ellinas moved up demoting Daly to fourth. At the chequered flag it was Sainz Jr, Venturini, Ellinas, Daly, Kvyat, Korjus, Fontana, Fumanelli, Harvey and Regalia.