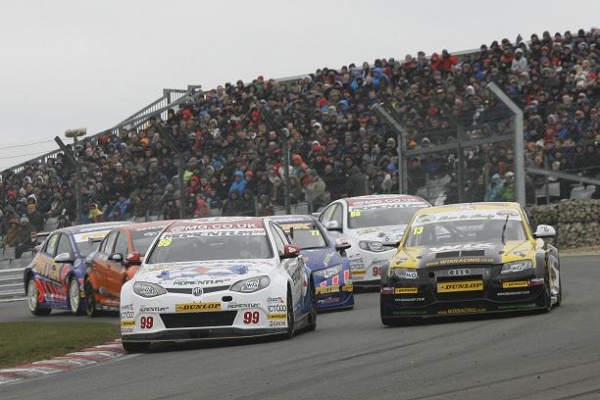 F1WEEKLY PODCAST NUMBER 621- NASIR IS BACK FROM SEPANG AND SHARES HIS THOUGHTS ON THE MALAYSIAN CONTROVERSY. MG TAKES VICTORY IN THE FIRST AND SECOND RACES IN THE BTCC SEASON OPENER AT BRANDS HATCH AND HONDA RALLIES IN THE FINAL RACE OF THE WEEKEND…

Matt Neal led home Honda Yuasa Racing team-mate Gordon Shedden in the final race to ensure the champion squad ended a challenging weekend on a high. Fellow Honda Civic driver Andrew Jordan is second in the standings after securing a pole position, two second places and a sixth from the weekend.

Plato won the opening race of the year after coming out on top of a pulsating battle with Jordan. Rob Austin had led the early running in his Audi A4 before both Plato and Jordan slipped by. A closing Jordan made one final lunge on Plato in an attempt to claim victory, and the rather optimistic move ended in contact with both cars sliding off the track. Incredibly both scrabbled their way back onto the circuit before third placed Austin had arrived, and Plato hung on to win.

Race two was a much more commanding affair as Plato took a lights-to-flag victory – the 76th win of his record breaking BTCC career. Jordan again claimed second, ahead of the charging Honda of reigning champion Shedden. The Scotsman was later excluded, however, after his car failed ride height regulations during post-race scrutineering, handing Jeff Smith a popular podium for Pirtek Racing.

Triple-champion Neal then went on to secure his first win of the new campaign, leading home team-mate Shedden by an incredibly close 0.083s. Neal took the lead early on after pole-sitter Mat Jackson slid wide in his Ford Focus at Druids. The Honda driver went on to take charge of the race, before fending off a late challenge from Shedden. A great drive from 23-year-old Sam Tordoff saw him score his maiden BTCC podium for the MG KX Momentum team, which along with Plato’s healthy points score means the squad is in charge of the Manufacturer standings.

The final race also included a huge accident when Dave Newsham spun his Toyota Avensis on the dip between Paddock and the run up to Druids. Austin attempted to take avoiding action but clipped Newsham’s stricken car on his way through. Austin’s Audi ran on to the grass at high speed before making heavy impact with the barrier on the inside of the circuit. Both drivers emerged unscathed from the dramatic incident.

The Jack Sears Trophy – for S2000 cars – is led by Liam Griffin after the Addison Lee Motorbase driver claimed two wins in his Ford Focus. James Kaye was the inaugural victor having won the first race in the AmDTuning.com VW Golf.

It was Jason Plato who left Kent with the biggest smile as the double-champion holds a nine-point lead in the standings over Jordan. Tordoff’s maiden podium and two top-six finishes mean he lies third in the championship, followed by the consistent Smith and race three victor Neal. The BTCC battle is rejoined at Donington Park in Leicestershire on 20-21 April.

Jason Plato said: “I am delighted with the first two wins. Last year was a sign of what might have come for us at MG – but we’ve changed the balance considerably now so it’s much easier to drive. It has been a good weekend.”

Matt Neal said: “I’m really chuffed with the one-two after what’s been a tough weekend, but they always say to finish on a high. It was a nice way to finish the race in Honda formation – it reminded me of the last race of last season.”

Penalties: Frank Wrathall (Dynojet) was fined £1000 and given three penalty points on his competition licence for incidents in race two.