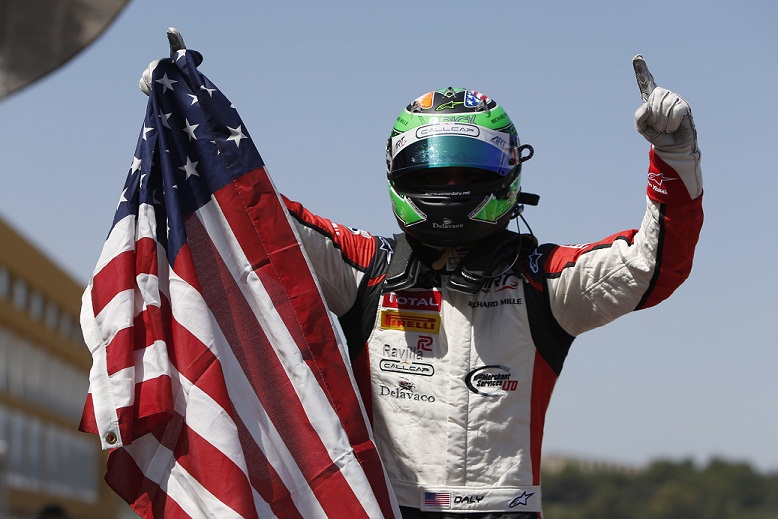 Daly triumphant in Valencia Race 1…
Conor Daly leads home Facu Regalia to ART Grand Prix 1-2 in Spain-
What a dream weekend for American Conor Daly. Pole position yesterday and a lights-to-flag win for the ART Grand Prix driver. It was made extra special for his French squad ART Grand Prix with Daly’s teammate Facu Regalia finishing in P2 just one second back. Koiranen GP rookie Kevin Korjus completed the podium.
The race got underway under clear blue skies and warm temperatures with pole-man Daly, retaining his lead ahead of Daniil Kvyat (MW Arden) and Regalia. There was an incident at turn 2 when Status Grand Prix’s Adderly Fong made contact with Trident’s David Fumanelli which put them both out of the race. Local favourite Carmen Jorda (Bamboo Engineering) was also an early casualty when she spun off on lap two.
Regalia soon passed Kvyat to hunt down his teammate, whilst Korjus also seized his opportunity to pounce on the Russian and move into P3. Argentine Regalia began to harass the American with all eyes on the battle at the front of the field with the pole-sitter managing to maintain a small advantage.
Spaniard Sainz (MW Arden) made a great start from P8 to move into fifth with Marussia Manor Racing’s Tio Ellinas close in pursuit. Carlin’s Nick Yelloly who started from P26 after being excluded from the results of qualifying, carved his way through the pack to finish just outside the top ten in P12.
At the midway point, one of the key battles on track was Dino Zamparelli in P8 holding off a determined Robert Visoiu. The Brit defended with all his might but in the latter stages the Romanian driver made a successful pass to clinch the position and provisional reverse pole. As the drivers managed their Pirelli tyres in the 18 lap race, a six-car train developed with Bamboo Engineering’s Melville McKee sneaking past Jenzer Motorsport’s Patric Niederhauser for P11.
Daly crossed the line, celebrating in fine style his second win in the GP3 Series season. Regalia followed him home to make it a great result for ART Grand Prix and score his maiden rostrum. Rookie Korjus achieved his second podium in just three races for newcomers Koiranen GP. Fourth was Kvyat, with Sainz in fifth pocketing two further points for fastest lap. Ellinas, Aaro Vainio (Koiranen GP), Visoiu, Zamparelli and Jack Harvey (ART Grand Prix) rounded out the top ten and point scorers.
Following Daly’s victory, he now heads the Driver’s Standings on 50 points, with Ellinas on 47 and Korjus on 33. After their one-two result ART Grand Prix lead the Team Standings on 81, with Koiranen GP on 64 and Marussia Manor Racing on 49.
Race 2 will start later today at 15.00 CET with Visoiu on reverse pole.
Valencia – Race 1