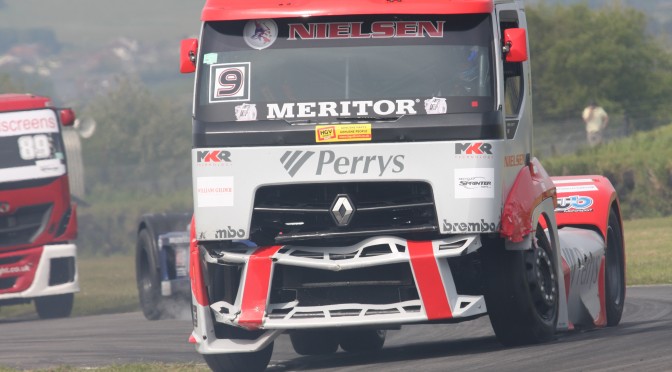 Pembrey to Echo to Thunder in the Valleys

The power and thunder of the British Truck Racing Championship will roar back into Pembrey next weekend (4/5 October), as one of the country’s most spectacular motor sport series speeds towards a thrilling conclusion to its 2014 campaign.

The field of phenomenal 5.5-tonne, 1,200bhp six-wheeled racing trucks visited the Carmarthenshire circuit earlier this year, delivering a monster display of high-octane thrills n’ spills. As the championship returns to South Wales next weekend, it does so with the title battles poised finely on a knife-edge.

Mat Summerfield and Chris Levett have waged a season-long duel for Division 1 honours. Whilst Levett in his MKR Renault has been the most prolific winner – tallying no fewer than 11 victories to-date, including one at Pembrey back in May – MAN TGX adversary Summerfield’s greater consistency sees him seven points ahead, although with seven successes to his credit, he has hardly been a stranger to the top step of the podium himself.

Steve Thomas remains firmly in touch in third place in the standings in his MAN TGA – and will be one of the favourites to spray the winner’s champagne and close the gap in the classification next weekend, having triumphed three times at Pembrey in the spring. Stuart Oliver (Scania P1150), Dave Jenkins (MAN TGX) and Richard Collett (MAN TGX), meanwhile, have all similarly emerged victorious over the course of the campaign thus far.

Former European Truck Racing Champion and ten-time British Truck Racing Champion Oliver was a Welsh winner in May. He also taught Wales international and Scarlets rugby centre player Scott Williams some of the tricks of the truck racing trade behind the wheel of his 16-gear behemoth – whose six-cylinder turbocharged diesel engine is capable of accelerating from 30-to-100mph in an eye-watering six seconds.

In Division 2, Iveco Stralis driver Simon Reid leads Ryan Smith by a single point arriving at Pembrey. Reid came out-of-the-blocks flying at the beginning of the campaign with four straight victories but has not reached the top of the rostrum since, as Sisu rival Smith has notched up ten successes and returns to Wales riding the crest of a wave off the back of a five-race winning streak.

Steve Powell (Foden Alfa) holds a watching brief in third, whilst brother and fellow former champion Graham Powell (Renault MACK) is the category’s ‘winningest’ competitor of 2014. Not only has the latter prevailed in-class on 12 occasions, but he went undefeated at Pembrey in May and even dominated four of the five encounters outright as he sped to ten consecutive early-season Division 2 triumphs.

That form guide suggests the battle between Division 1 and Division 2 contenders will be fairly evenly-matched as they prepare to return to the racetrack – adding further spice to the already intriguing title scenarios. Circuit manager Phil Davies clearly anticipates a firecracker of a weekend in-store.

“The British Truck Racing Championship is one of the indisputable highlights on Pembrey’s annual calendar, and the flame-spitting grid of monster trucks never fail to entertain and enthral,” he remarked. “There is plenty at stake in both divisions with so little to choose between the leading protagonists, and that is sure to generate some nail-biting wheel-to-wheel action throughout the field. You’d be mad to miss it!”

Tickets cost just £12 per adult per day and can be purchased on the gate, with accompanied children aged 14 and under admitted free. The track action begins at 09.00 on both Saturday and Sunday, with gates opening at 08.00 and camping available on Friday and Saturday night.

Image Captions:
Division 1 front-runners Chris Levett (above), Dave Jenkins and Mat Summerfield (below top right and second down on left), Steve Thomas (below second down on right) and Richard Collett and Stuart Oliver (below third and fourth down on left) are all sure to be in the mix at Pembrey next weekend. In Division 2, meanwhile, the usual suspects Ryan Smith and Graham Powell (below top left and third down on right) and Simon Reid (below bottom right) will doubtless be amongst those to keep an eye on in Carmarthenshire.
Credit: Jonathan Reeves