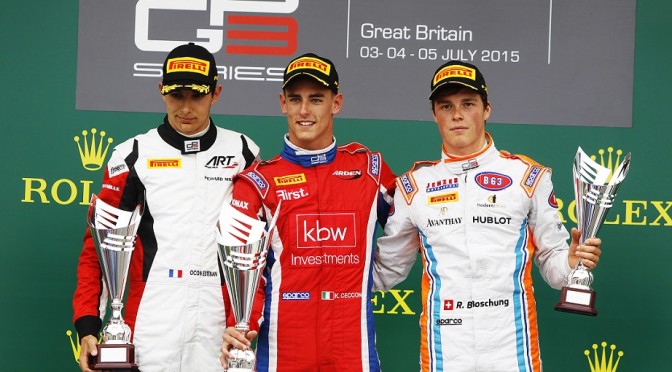 The smile could not be bigger for Kevin Ceccon: The Italian started today’s race from the front row in second place and made a strong start to sneak into the lead. The Arden International driver held off ART Grand Prix’s Esteban Ocon to collect his first win in the GP3 Series and pocketed two bonus points for posting the fastest lap. Jenzer Motorsport rookie Ralph Boschung achieved his debut rostrum in the category with third position.
Race 2 at Silverstone of the third round of the 2015 season was run in much cooler and overcast conditions compared to yesterday’s heatwave. Boschung started from reverse pole but had too much wheel-spin which dropped the Swiss debutant to third, with Ceccon and Ocon making good starts to pass him. Yesterday’s race winner Marvin Kirchhöfer started from eighth on the grid and was up to P5 after an excellent start but as always the opening lap is frenetic with positions changing and after the first lap he had dropped to P8. Koiranen GP’s Jimmy Eriksson was up to fourth ahead of Emil Bernstorff, Matthew Parry and Series leader Luca Ghiotto (Trident).
Ocon was all over the rear of Ceccon’s car on the opening lap, desperate to find a way through into the lead but the Italian covered off his advances and built up a small advantage of 1.2s early on. His Arden International teammate Bernstorff was also on the attack, the Brit was aiming for P4 and attempted a brave move on the outside of Eriksson but unfortunately he carried too much speed into the corner and ran wide. In the process he lost a place to Parry.
All eyes were on the battle of the Koiranen GP teammates: Eriksson and Parry. The Brit was fresh from his first podium yesterday was seeking another and glued himself to the Swede’s machine. This was a titanic tussle that raged throughout the 15 lap race.
Meanwhile at the front Ceccon had control of the race and was busy posting fastest laps and building his lead to 2.3s, but with four laps to go, his French rival Ocon began to light up the timing screens, reducing the deficit to just over a second. The Italian responded however and pulled a small advantage with a mature and confident drive to achieve his debut win in the GP3 Series.
On the penultimate lap, Parry went for the move on his teammate Eriksson and the duo raced side-by-side towards Maggots but the Brit got huge over-steer coming out of Becketts, costing him crucial time in the battle.
At the chequered flag, Ceccon’s joy was clear to see, finishing 1.5s ahead of Ocon, with Boschung seven seconds adrift. Eriksson withstood the gigantic pressure from Parry to clinch fourth, with Bernstorff, Ghiotto and Kirchhöfer completing the top eight.
Ghiotto retains the lead in the Drivers’ Standings: The Italian now has a five point lead over Kirchhöfer (the duo on 82 and 77 respectively). Ocon has moved up to third place on 64, one point ahead of Bernstorff.
ART Grand Prix remain on top inthe Teams’ Standings on 142 points, with Trident next up on 101 and Arden International on 96.
Round 4 will take place at the Hungaroring in Budapest on July 24-26.