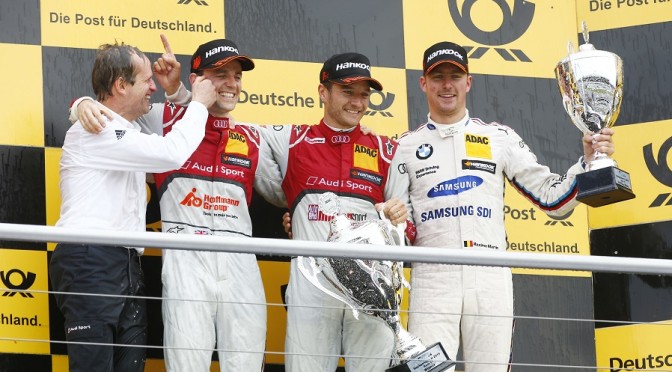 The battle for the DTM title has been decided: while Timo Scheider had a solitary drive to victory in the race at the Hockenheimring Baden-Württemberg and crossed the finish line as the undisputed winner, eighth place was enough for Pascal Wehrlein to be crowned as the youngest DTM champion in history of the popular touring car series. The Mercedes-Benz driver, who will be celebrating his 21st birthday on Sunday, is beyond reach in the lead of the drivers’ standings with a total of 169 points. On the radio, Wehrlein expressed his emotions after crossing the finish line and cheered loudly. “This simply is an incredible feeling,” Wehrlein said at the finish. “Now, the pressure has gone and I am simply overjoyed.”

Mattias Ekström, Edoardo Mortara and Bruno Spengler, the remaining challengers for the title, were unable to postpone the decision to Sunday: Ekström finished ninth after the turbulent race while his fellow Audi driver Mortara retired after 17 laps and Spengler’s race was over after 20 laps.

Behind race winner Timo Scheider, the German’s fellow Audi driver Jamie Green finished second. Third place went to Maxime Martin, who had started the race from pole position with his BMW M4 DTM, but already lost the lead to eventual race winner Scheider on the opening lap and then had to allow Green to get past as well.

In the DTM finale at Hockenheim, two titles are still at stake: in the teams’ standings, the gooix/Original Teile Mercedes-AMG team is leading with 225 points from BMW Team RMG (198 points). Prior to the final race of the season, BMW is leading the manufacturers’ standings. In the 17 races held so far, the brand from Munich has scored 583 points, while Audi and Mercedes-Benz are at a total of 527 and 520 points respectively.