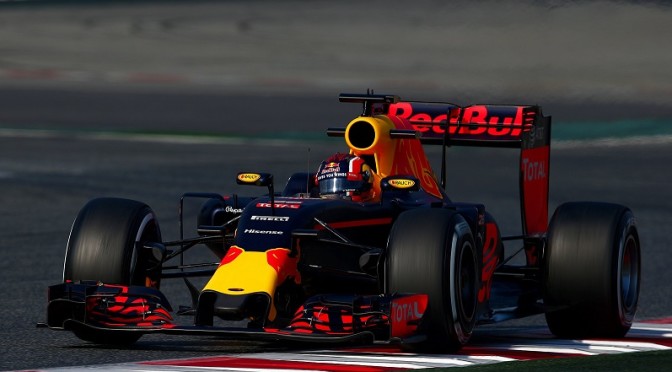 RED BULL PRE-SEASON TEST #1, BARCELONA – DAY FOUR
Driver: Daniil Kvyat
Car: RB12
Laps: 96
Best time: 1:24.293
Circuit length: 4.655km
Fastest Lap: K. Räikkönen (1:23.477)
Daniil Kvyat today brought Red Bull Racing’s first pre-season test of 2016 to a close by posting 96 laps at Circuit de Barcelona-Catalunya and claiming the second quickest lap of the fourth and final day of running in Spain, with a lap of 1:24.293.
Reflecting on his first two days in the cockpit of the Red Bull Racing-TAG Heuer RB12, Dany said: “I had two quite good test days, even though we would like to do more laps. But we have two days left next week, so it will be important to extract the maximum out of that opportunity, to figure out where we can make steps forward. Obviously it’s important to develop the car for the first race in Melbourne but even beyond that I think it will continue to improve as we understand the car more and more. We’ll try to get as much done as possible next week, I’m looking forward to it.”
Head of Race Engineering, Guillaume Rocquelin added: “We had a very good end to our first week of testing here in Barcelona. Overnight we found a solution to the niggle that affected us over the past two days and that enabled us to run pretty faultlessly today. It also meant that Dany was able to make up for the time lost yesterday. We focused on short runs, which is why the lap total is not that significant, as you obviously have to bring the car in more regularly and that delays things, but overall we’re happy with the amount of work we got through today. In fact, I think we’re satisfied with how the whole week went. Coming to the first test your main mission is to see whether you can run reliably, to find out if there are any issues and then to address those if you can. We’ve accomplished all those tasks this week and I think we’re where we want to be. We have four more days of testing next week and they are going to be incredibly busy, so a small rest now and then full steam ahead again next week.”