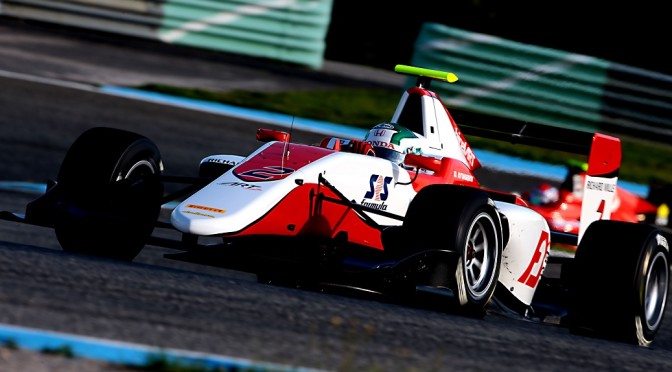 The 2016 season officially got underway today with day one of pre-season testing at the Circuito Estoril in Portugal. Three days of testing will take place here this week following the successful shakedown of the new GP3/16 car earlier this month. Japanese Nirei Fukuzumi posted the quickest time of the day which was set in the afternoon with a 1:28.645. Dutchman Steijn Schothorst was quickest in the morning session.
Following rain overnight, the track was wet at the start of the session, but with clear skies and the temperature gradually warming up, it wasn’t long before all the drivers switched to the slick Pirelli tyre.
In the opening hour, six drivers had posted a laptime – with the rest completing an installation lap. There was an early stoppage after Arden International’s Tatiana Calderon stopped on track with technical gremlins. Once the session resumed, DAMS’ rookie Jake Hughes went fastest lapping in the 1m31s.
There was a second red flag after Campos Racing’s Konstantin Tereshchenko ran off into the gravel. The track was green soon after with Hughes improving on his personal best to lap in the 1m30s. Albon displaced the Brit to head the timesheet at the start of the final hour until Jake Dennis bettered his time by two tenths to go top.
With three minutes left on the clock, Schothorst was first to dip into the 1m29s barrier to finish the morning session in P1 ahead of Dennis, Albon, Santino Ferrucci, Alex Palou, Matthew Parry, Fukuzumi, Jake Hughes, Ralph Boschung and Konstantin Tereshchenko.
Following a two hour lunch break, the afternoon session commenced in very high winds. It was Charles Leclerc who was fastest out of the blocks in the 1m30s before Albon lapped in the 1m29s ahead of Hughes and Kevin Jörg. It was an ART GP one-two when Leclerc shot up to P2 behind his Thai teammate, with Trident’s Giuliano Alesi and Artur Janosz completing the top five.
It was all change at the front as the clock ticked down – Parry broke into the 1m28s to take P1, ahead of Jenzer Motorsport’s Oscar Tunjo and Koiranen GP’ Ralph Boschung. The third red flag of the day was due to Tereshchenko stopping on track. Once his car was swiftly returned to the pitlane there was a frenetic end to the session. Fukuzumi flew to the top of the standings, a mere 0.015s ahead of Dennis, with his time unbeaten at the chequered flag. Albon, Leclerc, Jack Aitken, Hughes, Parry, Palou, Jörg, and Tunjo rounded out the top ten.