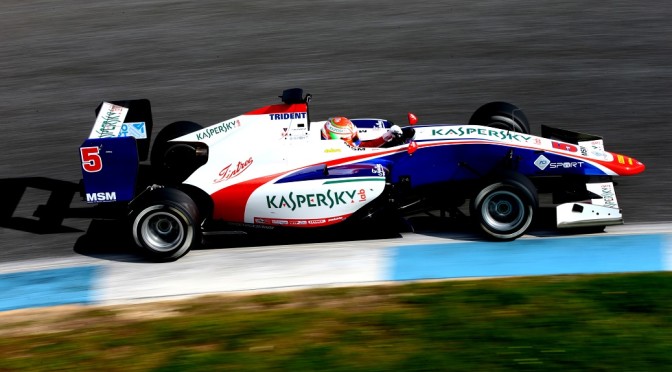 Trident and Ferrari Driver Academy’s Antonio Fuoco was quickest in both sessions on the second day of pre-season testing at Circuito Estoril in Portugal. The Italian driver’s best lap time of 1:27.991 set in the morning was two tenths quicker than ART Grand Prix’s Alexander Albon. Fuoco again headed the timesheet in the afternoon, this time just 0.062s clear of Arden International’s Jack Aitken.
Clouds and cooler temperatures greeted the paddock for testing but importantly the track was dry following overnight rain. DAMS’ Kevin Jörg and Jenzer Motorsport’s Oscar Tunjo set the early pace before Aitken was first to lap in the 1m29s. The times soon improved to 1m28s with Aitken again on top, ahead of Albon and Fuoco at the midway point of the session.
At the start of the final hour, birthday boy Albon bettered Aitken’s laptime by 0.022s to take P1 as the field concentrated on perfecting their set-ups and focusing on longer runs. Fuoco found some extra pace to dip into the 1m27s as the clock ticked down.
At the chequered flag Fuoco remained unchallenged in the 1m27s ahead of Albon, Aitken, Jake Hughes, Nirei Fukuzumi, Charles Leclerc, Nyck de Vries, Tunjo, Alex Palou and Jörg.
The afternoon session commenced after a two hour lunch break as the sun continued to shine down on the track. DAMS’ and Haas F1 Team development driver Santino Ferrucci led the way early on ahead of Jake Dennis and Jörg. Aitken headed to the top of the timesheet at the midway point before his teammate Tatiana Calderon lapped three tenths faster to go P1.
Trident’s Artur Janosz was first to break into the 1m28s in the afternoon before a flurry of changes at the top of the timesheet saw Dennis and Aitken hold an Arden one-two ahead of Ferrucci, Ralph Boschung and Janosz.  The session was halted briefly after a quick spin for Mahaveer Raghunathan, and with 25 minutes left on the clock the session resumed.
There was a second red flag when Leclerc stopped on track with 10 minutes to go. At the re-start, Fuoco was on another flier to take top spot with Aitken 0.062s shy of the Italian’s best effort. At the chequered flag behind Fuoco and Aitken were Janosz, Dennis, de Vries, Matthew Parry, Jörg, Ferrucci, Tunjo and Boschung.