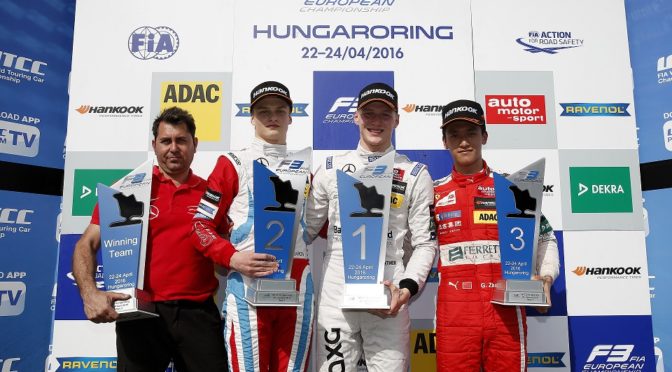 Having missed out on a podium finish in the first race at the 4.381 kilometres long Hungaroring earlier today, German driver Maximilian Günther (Prema Powerteam) made the best of his second pole position of the weekend and won from Estonian Ralf Aron (Prema Powerteam) and Chinese driver Guanyu Zhou (Motopark). At the track near the Hungarian capital Budapest, Aron was classified as the best-placed rookie in the FIA Formula 3 European Championship field. After a pit stop due to tyre issues, New Zealand’s Nick Cassidy (Prema Powerteam) had to make do with 16th position and lost his lead in the FIA Formula 3 European Championship drivers’ standings to Maximilian Günther. Ralf Aron also went ahead of his team-mate in the drivers’ standings.

Maximilian Günther took the lead at the start and drove an undisputed lights-to-flag victory home. Ralf Aron, the winner of the first race at the Hungaroring, slotted in behind his team-mate and brought second place home in an equally safe manner.

Behind the Prema Powerteam duo, George Russell (HitechGP) initially was running in third place, but Guanyu Zhou managed to overtake the Brit on lap eleven after a successful attack. Because his two new rivals Alessio Lorandi (Carlin) and Sérgio Sette Câmara (Motopark) were busy attacking each other, Russell was able to pull a little gap that he managed to defend until the end. Sette Câmara finished fifth behind Russell, Lorandi took the flag in sixth place. Mikkel Jensen (kfzteile24 Mücke Motorsport), Lance Stroll (Prema Powerteam), Callum Ilott (Van Amersfoort Racing) and Ben Barnicoat (HitechGP) rounded out the top ten.

Maximilian Günther (Prema Powerteam): “My start was good, much better than in the first race. After that, we had analysed the problem and I knew what I had to do. Once in front, I was able to control the race and secured the 1-2 for the Prema Powerteam, together with my team-mate Ralf Aron. This first place is also a nice gift for my mother, who is celebrating her 50th birthday today. The fact that I am now leading in the drivers’ standings is nice, but, of course, I know that there are still 25 races remaining.”

Ralf Aron (Prema Powerteam): “At the start, I slotted into second place right behind Maximilian. In the first corner, I was really closely behind him, but it wasn’t enough to mount a challenge. After that, I preferred to save the tyres. In hindsight, I probably was too defensive in the opening stages, but I am still happy with my second place.”

Guanyu Zhou (Motopark): “Here at the Hungaroring, our car is very strong, which my team-mates Niko Kari and Joel Eriksson already proved with their podium finishes in the first race. In the second race, I had a good start, but I almost lost control of my car in the first corner. After that, I was in fourth behind George Russell and I needed some patience before I was finally able to overtake him. All in all, I am happy with third place.”