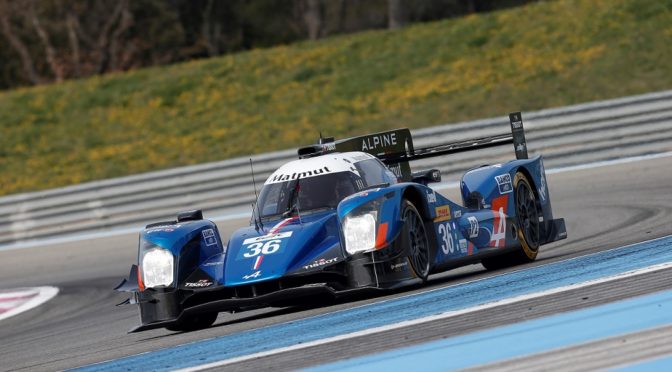 HEROIC VICTORY FOR ALPINE AT SPA-FRANCORCHAMPS!

Success for the N°36 Alpine A460 after a breath-taking fight that went down to the wire at the WEC 6 Hours of Spa-Francorchamps.

A forceful last stint from Nicolas Lapierre rounded off the work of his team-mates Stéphane Richelmi and Gustavo Menezes.

The run of the N°35 Baxi DC Racing Alpine car in the hands of Nelson Panciatici / David Cheng / Ho-Pin Tung was halted just before the finish because of damage incurred in a collision with a backmarker.

In contrast to the wintry weather encountered at Silverstone, the FIA WEC teams enjoyed summery weather at Spa-Francorchamps, Belgium, where the championship’s regulars kicked off the race at 2:30pm local time in front of a packed house.

The N°36 Signatech-Alpine started from second place on the LMP2 grid, while the N°35 Baxi DC Racing Alpine car lined up in 10th position after Spa rookie David Cheng’s ‘out’ lap during qualifying was spoiled by a red flag incident. By the time the green flag reappeared, his tyres had cooled down excessively for his flying lap when he was also hindered by traffic.

During the early part of the race, both Alpine A460s set a strong pace while also complying with the fuel and tyre management recommendations of the team’s engineers.

The first two hours saw the N°36 car defend third place as the N°35 prototype fought its way up the field in the hands of Nelson Panciatici, who was succeeded at the wheel by Ho-Pin Tung. By the halfway point (three hours), the N°36 Alpine was running second and the sister car was up to fourth!

Stéphane Richelmi lost a little ground in a spin after he was hit by the N°7 Audi but he was still second when he handed over to Gustavo Menezes who inherited the class lead when the leading car made a mistake.

The N°36 Alpine A460 continued at a strong pace to build up a handsome cushion over its chasers. The N°35 machine fell back, however, when it was issued with a ‘drive through’ penalty after two airguns had been used simultaneously during a pit stop.

There was a dramatic conclusion to the six-hour classic when the Safety Car was despatched shortly before the start of the final hour due to a GT car which had smashed into the guardrail at Eau Rouge.

The ensuing queue saw the leading car’s margin slashed to nothing, while the N°35 Alpine lost a lap due to its position on the track relative to the Safety Car. When racing resumed, Nicolas Lapierre succeeded in pulling clear once more but he was compelled to make one last ‘splash and dash’ refuelling stop with around 10 minutes remaining.

The Frenchman re-joined in second place behind rival Derani and the two drivers were soon battling again. The Alpine driver recovered his lead thanks to a daring passing manoeuvre with the chequered flag in sight!

While the team was celebrating the move, the N°35 car was reported to be running slowly with a puncture and broken rear suspension followinga collision with a backmarker, an incident which ended up side-lining Nelson Panciatici for good.

Meanwhile, Nicolas Lapierre kept his head to collect Alpine’s second victory at world championship level after the team’s success at the 2015 6 Hours of Shanghai. The result at in Belgium was the first win for the new Alpine A460.

The team’s next public appearance will be the official pre-Le Mans 24 Hours Test Day on Sunday, June 5, ahead of the calendar’s showpiece itself on June 18-19.