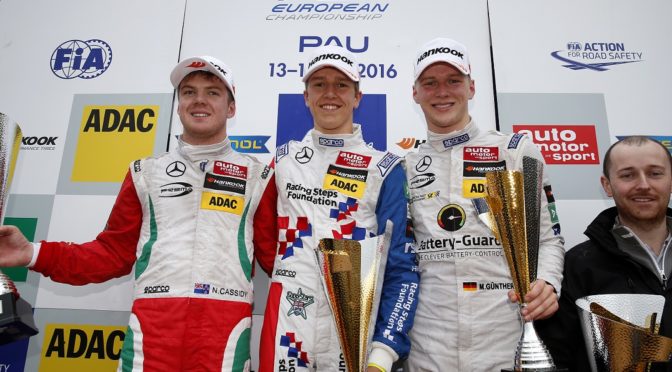 DOMINANT VICTORY FOR BEN BARNICOT IN THE RAIN

At a rain-soaked track in Pau, Ben Barnicoat (HitechGP) scored his second FIA Formula 3 European Championship race win. At the start, the British rookie driver took the lead and celebrated an undisputed victory after 24 laps. Behind him, Nick Cassidy (Prema Powerteam) beat Maximilian Günther (Prema Powerteam) to take the flag in second place. In the drivers’ standings, Günther extended his victory to eleven points from Cassidy. After his second win from as many races, Barnicoat moved up to fourth place in the drivers’ standings. The HitechGP driver also moved up into the lead of the rookie standings.

Pole-sitter Lance Stroll (Prema Powerteam) already saw his hopes of a podium finish fade away at the start. The Canadian had a poor getaway and returned from the opening lap down in ninth place. Ben Barnicoat used the opportunity and took the lead. Maximilian Günther, Nick Cassidy, George Russell (Hitech GP) and Callum Ilott (Van Amersfoort Racing) followed suit. Especially in the first few laps, leader Barnicoat clearly was the fastest driver in the field and extended his margin from second-placed Günther lap after lap. On lap eight, with Barnicoat already over five seconds ahead of Günther, Zhi Cong Li spun into the Armco barriers and caused the only safety car intervention of the race.

Ben Barnicoat (HitechGP): “I am really happy with my first place. Rain had already been forecast for a long time, which suits me very well. At the start, I was able to move up into the lead and I managed to pull clear from the rest of the field during the first few laps. Unfortunately, then, the safety car came out. When Nick was behind me after the restart, things got a little more difficult, because he was quicker than Maximilian had been before. I concentrated to avoid any mistakes and I succeeded.”

Nick Cassidy (Prema Powerteam): “My race was good and I am very happy with my second place in my first race at Pau. Initially, I was behind Maximilian, but I had to wait until the restart after the safety car to overtake him. The move wasn’t without any risk, especially in these conditions, but it worked out.”

Maximilian Günther (Prema Powerteam): “My start was good and I moved up into second place. However, I wasn’t able to follow Ben, who was in front of me, and then Nick overtook me after the safety car. Then, I tried to bring the points for third place home. The fact that I am still leading the FIA Formula 3 European Championship drivers’ standings makes me happy, but it doesn’t really play a major role for me. The thing that counts, however, is being on top at the end of the season.”