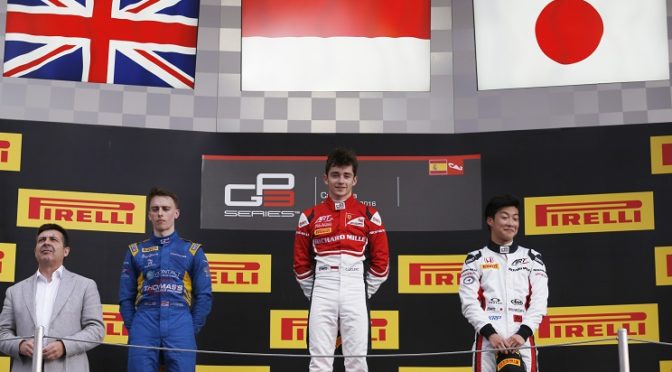 ART Grand Prix’s Charles Leclerc victorious in opening race of the season
Monegasque Charles Leclerc made the most of an excellent start from the second row to sneak into the lead by Turn One and claim the honours for the first race of the 2016 GP3 Series season. The ART Grand Prix and Ferrari Driver Academy ace controlled the race perfectly at the Circuit de Catalunya from then on to record his maiden win in the category with a six seconds advantage over pole-sitter Jake Hughes (DAMS). ART Grand Prix’s Nirei Fukuzumi was third.
Light rain fell ahead of the forty-minute race with all teams looking up to the heavens wondering if a wet race were on the cards. Slick Pirelli tyres were used on all 24 cars as the anticipation was finally over as the season commenced. It was an all DAMS front row with Hughes and Kevin Jörg but Leclerc in third made a lightning getaway to race into the lead before they reached the first corner. The Swiss debutant lost several places at the start, whilst Fukuzumi and Antonio Fuoco made great getaways to move into third and fifth respectively.
In the opening few laps, Hughes was glued to the rear of Leclerc’s machine, eager to fight back into the lead but the Monegasque resisted his efforts. Meanwhile behind the duo at the front was a squabble between Jörg and Alexander Albon with the DAMS driver managing to hold the Thai at bay.
As the laps ticked down, Leclerc maintained a small margin at the front of around 1.7s with Fukuzumi in third a few seconds adrift of Hughes. All eyes were on the battle for P10 as there was a tasty dice between the Koiranen GP trio of Ralph Boschung, Matevos Isaakyan and Matthew Parry – they remained tight throughout the 22 lap race.
At the midway point, Leclerc’s lead over Hughes was 2.2s as the dark clouds remained menacing above. Fuoco in fourth had his mirrors full of Jörg, Albon, Jake Dennis and Oscar Tunjo in the latter stage, but the positions remained the same.
At the chequered flag, Leclerc was jubilant to record an impressive win whilst Hughes recorded the first podium for newcomers DAMS with Fukuzumi completing the rostrum. Fuoco, Jörg, Albon, Dennis, Tunjo, Nyck de Vries and Boschung completed the top ten.