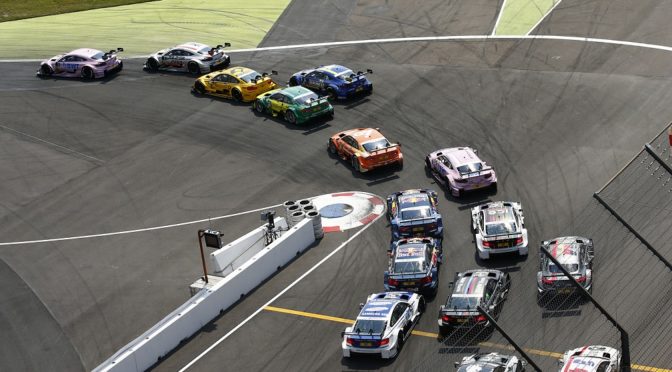 The stars shone at Lausitz: for the first time in his career, Mercedes-AMG DTM driver Lucas Auer won a DTM race. In the race on Sunday during the Motorsport Festival at Lausitzring, the Austrian scored his first major success in the most popular international touring car series – the first victory for an Austrian driver in DTM history – after having started from pole position into the 23rd DTM race of his career. In front of 67,500 spectators, the 21-year-old crossed the finish line after 46 laps with a margin of 3.763 seconds from Audi driver Mattias Ekström. The Swede had started from ninth place.

“I have only dreamt about winning a race in my second DTM season, but I never thought that it would actually work out. I am overjoyed,” the Tyrolean said during the prize-giving ceremony. “A good start and the first lap were crucial and I managed to get them right,” he summed up the key to his victory. Third place in the sixth DTM race of the season went to Auer’s fellow Mercedes-AMG DTM driver Robert Wickens, who also took the lead in the DTM drivers’ standings with this result.

Jamie Green finished fourth at Lausitz from Gary Paffett. Marco Wittmann was the best-placed BMW driver on Sunday in sixth place. In seventh to tenth, Christian Vietoris, Nico Müller, Bruno Spengler and Timo Glock rounded out the top ten in the second race of the weekend.

After six of this season’s 18 races, Robert Wickens is leading the DTM drivers’ standings with 58 points from Marco Wittmann (55 points). Mattias Ekström (46 points) has moved up to third with his second-place finish. Jamie Green (45 points), Edoardo Mortara (44 points) and Paul Di Resta (43 points) follow in fourth to sixth place.

In almost three weeks, from June 24 till 26, 2016, the DTM will be racing at the Norisring in Nuremberg, the only street circuit on the calendar, with the seventh and eighth race of the season.