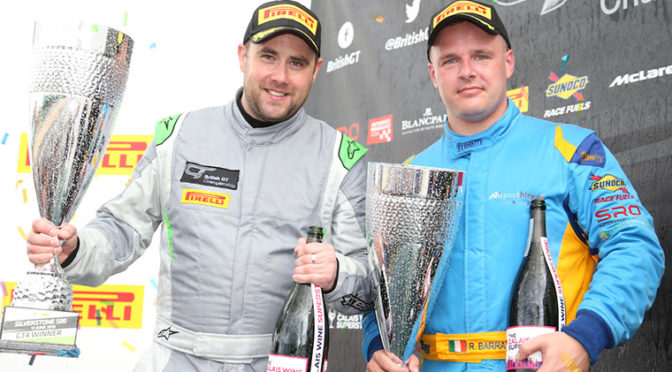 The unpredictability caused by treacherous conditions and Safety Cars, as well as the 33-strong field comprising British GT and GT4 European Series entries, was underlined by Century Motorsport’s Anna Walewska and Nathan Freke starting ninth but finishing second, while Beechdean AMR’s Jordan Albert and Jack Bartholomew completed the podium after running in the top-three for much of the afternoon.

Heavy rain ensured the three-hour, 500-kilometre contest started under Safety Car conditions, but when racing began in earnest after three laps it was Bartholomew who reacted quickest to wrestle the lead from Black Bull Ecurie Ecosse’s Sandy Mitchell around the outside of Copse. Marcus Hoggarth also made his customary electric start to bring the Ebor GT Maserati up from 12th to third before a second Safety Car was required for debris on track with 34 minutes gone.

However, it was the subsequent flurry of pit-stops that brought RCIB Insurance Racing’s #75 Ginetta into the frame. The combination of stopping a lap later than most of their rivals and vagaries of the Safety Car’s position on track helped Barrable, who’d taken over from Mason, make up half a lap on the rest of the field, which was enough to give him the lead once racing resumed.

The Irishman’s rallying pedigree then became apparent in the wet and greasy conditions before Mason climbed back aboard. Another perfectly executed stint followed but, again, the team’s decision to delay its final stop in an effort to see out a short, sharp rain shower before switching to slick tyres paid dividends.

Their pit-stop success penalty for finishing third at Oulton meant Barrable was held stationary for an additional 10 seconds, but that proved insufficient to prevent him from catching and passing Matt Nicoll-Jones’ Academy Motorsport Aston Martin that effectively held the class lead as the highest placed contender to have made its three mandatory stops.

Barrable eventually took the chequered flag 18 seconds clear of the next best GT4 and over a minute ahead of he and Mason’s nearest British GT rivals, Walewska and Freke, who kept their noses clean throughout the three hours to equal their best result of the season. Beechdean AMR’s Bartholomew and Albert were ever-present in the top-four en route to third while Nicoll-Jones and Dennis Strandberg’s alternative strategy of stopping under the Safety Car in the opening laps netted them fourth on a one-off domestic outing.

Century’s second Ginetta, driven by Sean Byrne and Aleksander Schjerpen, also went under the radar on its way to fifth after starting 13th of the British GT4 contingent. Ebor GT’s Hoggarth and Abbie Eaton might well have finished on the podium after the latter lead for much of the crew’s second stint before a combination of Hoggarth’s spin and 15-second success penalty for finishing as runner-up at Oulton relegated them to sixth.

A number of high-profile candidates fell by the wayside, including Mitchell and Ciaran Haggerty’s pole-sitting Black Bull Ecurie Ecosse McLaren 570S which, like the Maserati, would have been a podium contender were it not for an intermittent engine issue that eventually forced its retirement

All of that means Bartholomew and Jordan have re-taken the championship lead, albeit by just 3.5 points from Johnson and Robinson who still enjoy a 21.5-point cushion over Walewska and Freke in third.

Jake Giddings might have finished 13th in class but his best of 2m15.206s was enough to seal the Sunoco Fastest Lap of the Weekend Award and a new British GT4 lap record for Silverstone.