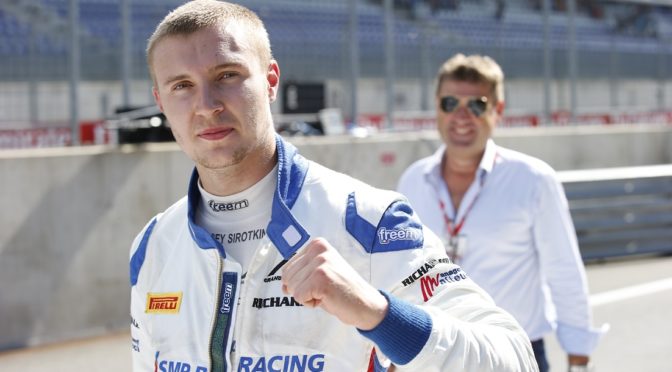 ART Grand Prix driver denies Antonio Giovinazzi
Sergey Sirotkin took his second pole position of the season in today’s qualifying session at the Red Bull Ring. The Russian driver set the fastest laptime in a 1:13.663 denying Antonio Giovinazzi by six thousandths. Pierre Gasly completed the top three.
The session opened once again in sunny conditions and warm temperatures. The drivers fed onto the track eager to put their Supersoft Pirelli tyres to good use. Sirotkin was quick to set the early pace but Gasly was the first man to dip under 1m14s, lapping the Austrian track in a 1:13.974 and claiming the provisional pole.
Halfway through the session, the cars returned to the pits for fresh rubber. With ten minutes left on the clock, Alex Lynn led the final charge. On a busy track, Sirotkin found a clear lap to clock in a laptime of 1:13.663 – almost a second better than last year’s pole, and went top. Giovinazzi lit the first sector in purple and was on a flyer but went too wide in the final corner. The Italian driver had to settle for P2 ahead of teammate Gasly who also improved but not enough to start from the front row. On his final attempt, rookie Luca Ghiotto found some extra pace to move up to P4; his best qualifying result this season. The session ended under yellow flags after Jimmy Eriksson stopped at Turn 7.
At the chequered flag, behind the top three, Ghiotto, Artem Markelov, Raffaele Marciello, Oliver Rowland, Lynn, Norman Nato and Mitch Evans rounded up the top ten.