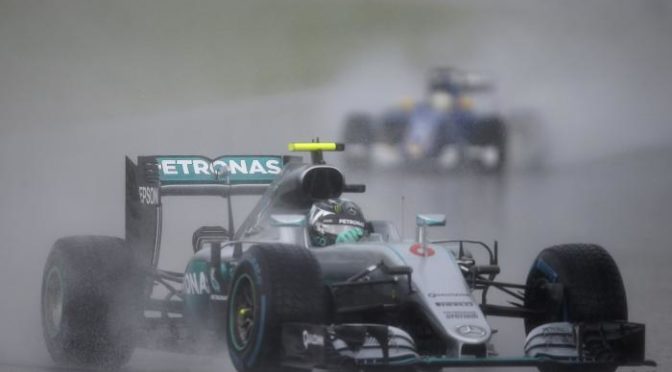 The championship-leading 31-year-old German produced a fastest lap of one minute and 19.965 seconds at the end of a session stretched to nearly two hours by heavy rain and crashes in the hazardous conditions on the twisting Hungaroring circuit on Saturday.

Defending three-time champion Hamilton, who is just one point behind Rosberg after 10 of this year’s 21 races, was 0.143 seconds behind his rival as the pair secured their team’s sixth front-row lockout of the season.

“It was a really challenging qualifying with the changing conditions all the time,” said Rosberg.

Hamilton looked to be on course to take pole when on an improved best lap he came across Spaniard Fernando Alonso’s McLaren spinning off the track in front of him.

The Briton had to take evasive action, which cost him time, before Rosberg came round and was able to continue without easing off.

“It was unfortunate with Fernando, but these things happen,” said Hamilton, who has been gnawing away at Rosberg’s lead in the standings and is chasing a third win in succession.

“I did the best I could do and it’s a long race tomorrow so I’ll give it everything I’ve got.”

“I’ve been feeling really good out there the whole weekend in all conditions. I’m looking forward to the race and the great opportunity tomorrow.”