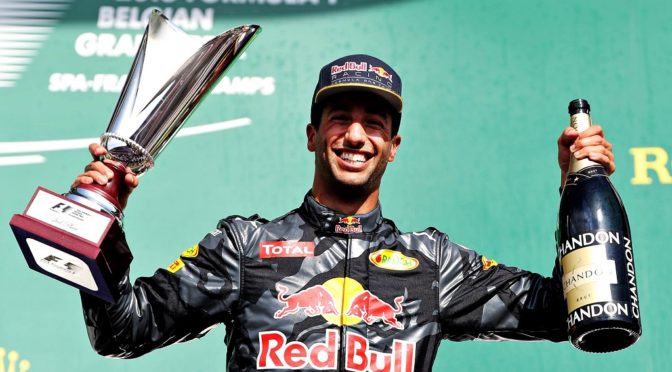 RED BULL RACING ON THE RESULTS AT SPA-FRANCORCHAMPS

DANIEL RICCIARDO, Finish Position: 2nd, Start Position: 5th
“I’m pleased with that result, I knew a podium was on today. Of course you can never guarantee, but I knew if we had the pace that we did on Friday, that we would be able to get there. With Lewis starting at the back it was an opportunity to get at least a second place, and we got that. A win is always the big target, but Nico had the pace that we expected, so second is the best we could have done. There was a lot going on at the start and I actually hit some of the debris which damaged the front wing, so the red flag helped us as we were able to repair it. Before that the car was quite affected. Then, after that we got going; there wasn’t too much action for me, but I was just trying to be consistent and the outcome was good! The fans this weekend have been awesome. The driver parade was great, 99% of the fans are here for Max but they were cheering everyone and it was good sportsmanship; Max got bigger cheers but they were waving and cheering for everyone, it was really good to see. So big respect to the Dutch and Belgian fans, they were really cool.”
MAX VERSTAPPEN, Finish Position: 11th, Start Position: 2nd
“Today was very unfortunate. I didn’t start as well as I wanted but I got up the inside for the first corner then got squeezed by the two Ferraris. In the contact my front wing and the floor got destroyed so then the car was very difficult to drive and the race was gone. Still, I tried my best to come back especially for all the people who were cheering me on in the stands, but unfortunately I didn’t get in the points. Luckily we got Daniel on the podium so we still scored some more points for the team. It’s good to have another race next week and we’ll try to do the best job possible at Monza. The race didn’t turn out the way I wanted but before that we had a great weekend here in Spa and it was great to have some interaction with all the fans who came out to support me.”
CHRISTIAN HORNER, Team Principal: “An impressive performance by Daniel today; a great disciplined drive, looking after his tyres and making an effective two-stop strategy work. To finish second, at the type of venue that we weren’t expecting to be our strongest, is an amazing result. He picked up a little bit of damage after the first corner but we were able to repair that in the break (during a red flag), and he drove a strong race thereafter. Max’s race was compromised after turn one. After an average start he got inside of Kimi into that turn but unfortunately he was squeezed from the outside by Sebastian and three into one quite simply doesn’t go. The resulting damage significantly compromised the aerodynamics on the underside of the car costing him about a second and half per lap. He made a strong recovery to finish unfortunately just outside the points, It’s clearly not the result he was looking for in front of such an enormous crowd that came out to support him all weekend but hopefully a lot more positive races to come. For the team to be coming away from Spa still second in the Constructors’ Championship, and having extended our lead over Ferrari, is more than we could have envisaged.”