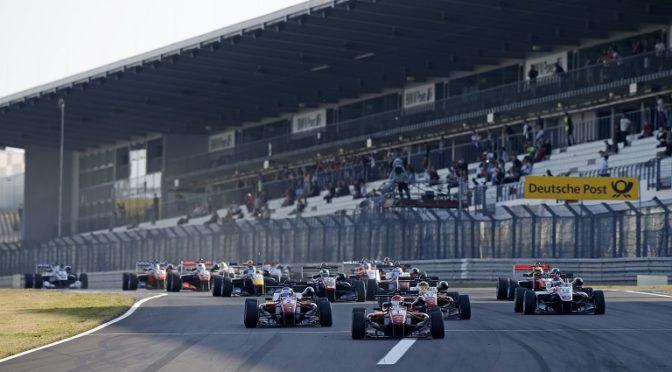 LANCE STROLL TAKES HIS EIGHTH WIN OF THE SEASON

With his eighth race win of the season, 17-year-old Canadian Lance Stroll (Prema Powerteam) extended his lead in the FIA Formula 3 European Championship drivers’ standings: the junior driver of the Williams Formula 1 team now has 68 points more than Maximilian Günther (Prema Powerteam), who is second in the standings. At the 3.629 kilometres long Nürburgring sprint circuit, Maximilian Günther and George Russell (HitechGP) joined race winner Stroll on the winner’s podium.

Having started from pole position, Lance Stroll took the lead and immediately pulled clear from the rest of the field. During the first 14 laps, Nick Cassidy (Prema Powerteam) was his nearest rival, but on lap 15, the New Zealander dropped back from second to fourth due to a technical problem with the virtual safety car mode. Thus, Maximilian Günther took over second place while George Russell moved up into third. The top three made it to the finish in that order without any problems, but Cassidy had to defend his position against Callum Ilott (Van Amersfoort Racing) until the end of the 22nd race of the FIA Formula 3 European Championship season. Eventually, Cassidy took the flag 0.510 seconds ahead of Ilott.

Lance Stroll (Prema Powerteam): “This race wasn’t particularly thrilling. At the start, I was able to take the lead and then extend it further and further. My car was fantastic and the pace was really good throughout the race. However, I feel sorry for Nick. His car seems to have switched into the virtual safety car mode automatically, so that he lost his second place. Otherwise, it would have been a clean sweep of the podium for the Prema Powerteam. I was informed about Nick’s problem during the race and drove particularly cautiously after that.”

Maximilian Günther (Prema Powerteam): “I was third after the start, but then was able to benefit as Nick had problems. Even though second place for me is nice, losing second place like this is too bad for Nick. In the drivers’ standings, my gap to Lance has increased to 68 laps, but I am not giving up. I am working from one race to another and, with second and first place on the grid for the next two races here at the Nürburgring, I am in a good position.”

George Russell (HitechGP): “My start was good, but I couldn’t get up any further than fourth place. When Nick then had his technical issues, I was able to overtake him and pick up third place. Gaining a position like this is never nice, but of course, I took the chance as it occurred. For Nick, it is obviously annoying.”