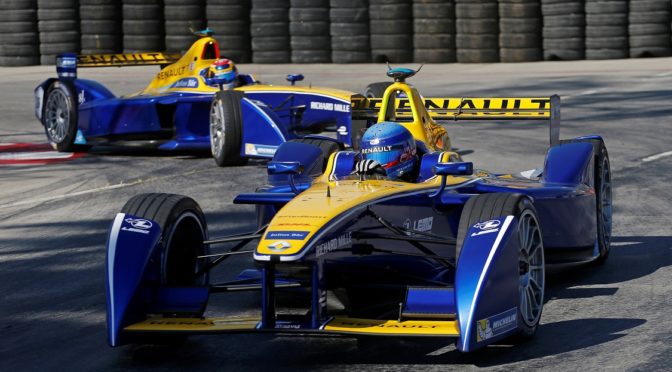 Renault e.dams has won the second race of season three of the FIA Formula E Championship with a robust run up the order from Sébastien Buemi from seventh on the grid in the Marrakesh ePrix. Séb had qualified second at the Circuit International Automobile Moulay El Hassan, only to be given a five-place grid penalty due to an issue with his car’s fire extinguisher, but team strategy allied to efficient energy deployment and exemplary driving saw Séb’s eighth career Formula E win.

Nico Prost drove a strong and mature race too, translating his sixth-position on the grid to P4 at the chequered flag. Nico had earlier been drawn in the first qualifying group and was unlucky to miss out on the final Superpole shoot-out.

Renault e.dams leaves Marrakesh with 74 points in the Championship, ahead of ABT Schaeffler Audi Sport and Mahindra Racing who both have 36 points. Sébastian has 50 points in the Drivers’ Championship with his nearest rival, Lucas di Grassi, on 28. Nico Prost is in third position with 24 points.

Renault e.dams, Sébastien and Nico will next be seen in action for the third round of season three, the Buenos Aires ePrix on the Circuito de Puerto Madero in Argentina on February 18, 2017.

“My cars were amazing today and the balance was really good. In my first lap I used a bit too much energy but after that we were able to save charge so we could be strong and push when we needed later in the stint, and this really worked for us. We know we have an efficient car and we had to take advantage of that after we started further back on the grid than we wanted. I was able to extract everything I needed from the car and it shows the team is working really well, so it’s been a very positive start to the season.”

“I am happy about my race but a little frustrated that I wasn’t able to qualify higher. I showed good pace in practice but Q1 is the most difficult qualifying session to deliver in, even if it was very close to Superpole. I consumed a little bit too much energy in my out-lap, which meant I had to save a little bit in my first stint of the race. Nevertheless, I was able to overtake Daniel Abt and push strongly. Certainly, I would have preferred to have finished on the podium here – and in Hong Kong – but the most important thing is scoring points.”