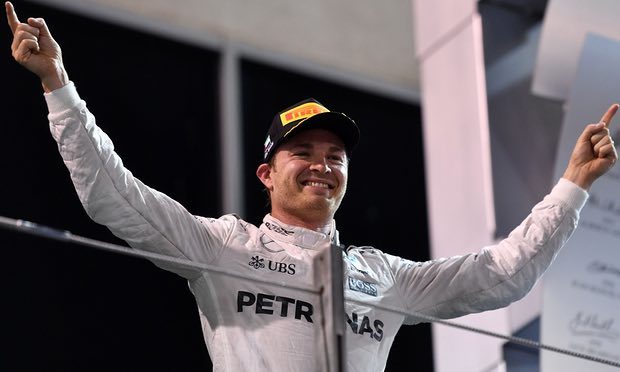 Rosberg has won his maiden Formula One world championship. Needing to finish in the top three in Sunday’s final race of the season in Abu Dhabi he was second to his Mercedes team-mate Lewis Hamilton.

But he had to survive a scary few final laps as the outgoing champion ignored team orders and attempted to back Rosberg into the cars behind.

The result means Rosberg has won the tile by five points. The fact that Hamilton has won 10 races to Rosberg’s nine this year will be of no consolation to him.

It was another controlled, calculated race by the German to bring him the title he has always coveted. But he also showed some courage in his overtaking move on Max Verstappen to regain second place, almost colliding before surging into the lead.

But Rosberg had to survive a late fright as Hamilton employed some gamesmanship by slowing down.

With Hamilton leading, Mercedes told him to quicken up. They asked the driver why he was going so slowly, then said: “Lewis this is an instruction, we need 45.1 for the win.” But Hamilton replied: “I suggest you just let us race.”

With Max Verstappen behind Rosberg, and Sebastian Vettel closing fast on fresher rubber, it was a scary moment for Mercedes and Rosberg. The team’s technical director Paddy Lowe came on the radio and said: “Lewis, this is Paddy, we need you to pick up the pace to win this race.”

But again the plea fell on deaf ears. Vettel went past Verstappen to take third and then closed on Rosberg with Hamilton making no attempt to stretch out the pack. “Right now I’m losing the world championship, whether I win or lose this race,” Hamilton said.

Rosberg was reminded that third would be good enough, and with Verstappen struggling on old rubber there was no real threat on the German in the final lap.

But in the end it was the usual one-two for Mercedes, with Vettel third and Verstappen fourth.