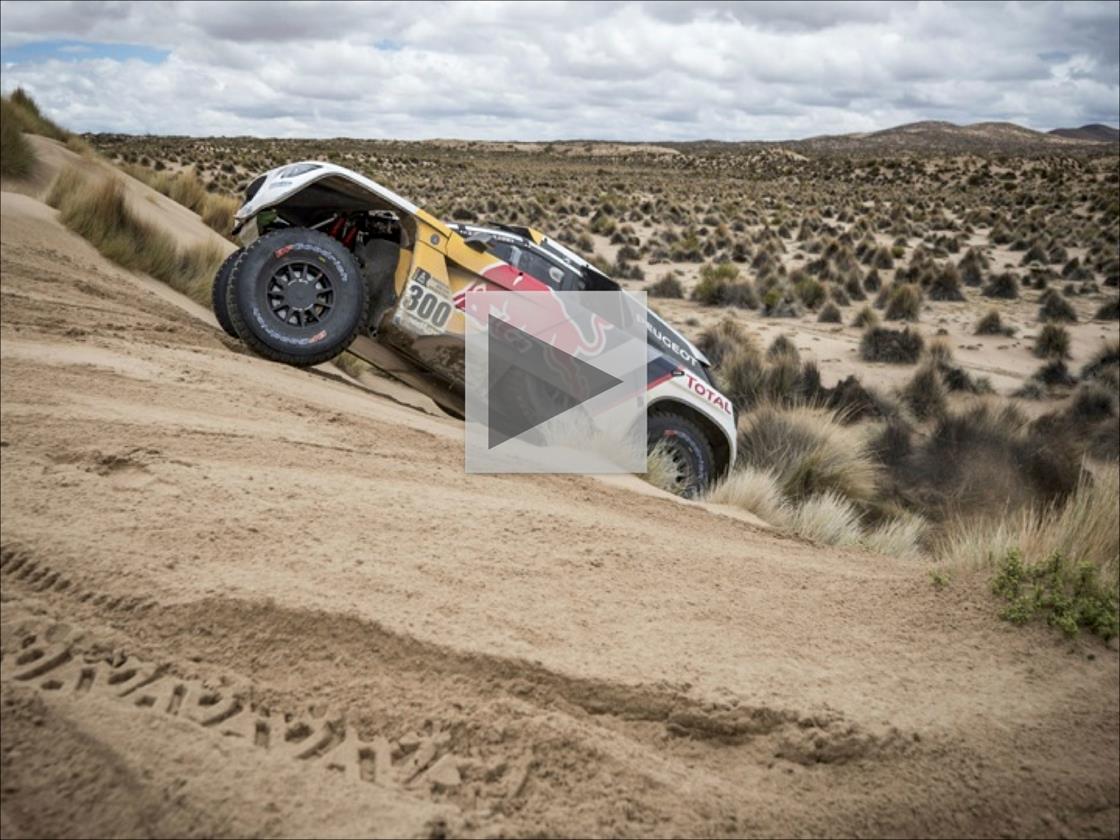 The midpoint Rest Day of the 2017 Dakar Rally is already a distant memory as racers are left fending for themselves on the fringes of the world’s largest salt flat in Uyuni, Bolivia. Stage Seven is the first half of this year’s marathon stage so every competitor still in the race spends tonight separated from their mechanics and any work needed on their machines must be performed solo.

Adding to the increased difficulty that comes with a marathon stage have been the “extreme climatic conditions” we have been experiencing in Bolivia. Heavy downpours of rain have played havoc with the course and a redesigned Stage Seven gave us a timed special stage of 161km over mostly sandy terrain. Taking a vantage point of the action today was windsurfing legend Robby Naish who after touring the Rest Day bivouac got to see those same machines unleashed over open country.

Naish had a firsthand look at one of the day’s most impressive performances as Stéphane Peterhansel (FRA) upped his lead in the car category with a stage win. The 12-time Dakar champion increased his advantage over fellow Team Peugeot Total driver Sébastien Loeb (FRA) by 48 seconds with the difference between the two Frenchman in first and second overall now standing at a tantalising 1m57s.

Cyril Despres (FRA), the third PEUGEOT 3008 DKR driver, slips back to fourth overall after conceding nine minutes to Peterhansel on Stage Seven. Meanwhile, there was something to celebrate for Giniel De Villiers (ZAF) of Toyota Gazoo Racing who secured a podium finish on today’s stage behind Despres’ two Peugeot team-mates.

The bikes were first to tackle today’s route and opening the road was Sam Sunderland (GBR) of the Red Bull KTM Factory Team. Despite a navigation hiccup 38 kilometres into the special the race leader was able to recover and maintains his position at the top of the general classification overnight. Sunderland’s team-mate Matthias Walkner (AUT) is also in with a shout of a podium finish with the Austrian biker in fifth place overall. Considering neither rider has ever completed an entire Dakar Rally their achievements to date have been mightily impressive.

Elsewhere in the race, local crowds were on their feet to cheer Bolivian biker Walter Nosiglia Jager who secured a Top 10 finish on the stage in his homeland.

A podium finish on today’s quad stage has kept Ignacio Casale (CHL) in contact with race leader Sergey Karyakin (RUS). Thanks to Casale arriving in Uyuni as the third quickest quad biker he now stands 16 minutes behind Karyakin who will open the road tomorrow.

An already shortened stage was reduced by a further 20km for the truck class due to the final part of the track proving impassable even for the Dakar’s biggest beasts. Defending champion Gerard De Rooy (NLD) once again reacted well to the Team Kamaz Master trio of Eduard Nikolaev (RUS), Dmitry Sotnikov (RUS) and Ayrat Mardeev (RUS) breathing down his neck. De Rooy keeps his overall lead despite Sotnikov’s stage win who now sits second overall with Nikolaev third and Mardeev fourth.

Competitors with sound mechanical knowhow will hope to be rewarded tomorrow on the second half of the marathon stage. The timed special stage will account for 492km of the total 892km to be covered on Tuesday. For the 255 of the 318 vehicles that started the first stage in Paraguay still in the race the next challenge is to safely reach the Salta bivouac after recrossing the border into Argentina.