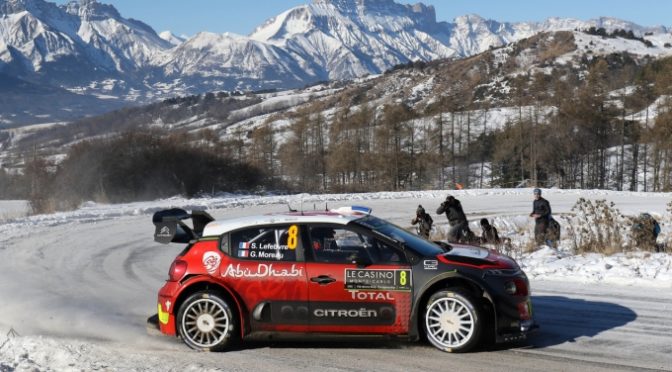 DIFFICULT TO BREAK THE ICE!

The specialists all agree, this year is a “proper Monte-Carlo”, featuring the full range of difficulties that can arise at this event. The Citroën Total Abu Dhabi WRT has not escaped unscathed – far from it! Today, it was Kris Meeke’s turn to run into trouble, the Ulsterman having to retire after going off on SS4. Both Citroën C3 WRCs will nonetheless continue with their race tomorrow, as they go in search of Manufacturers’ World Championship points.

– This second leg featured two loops of three stages, held in the Hautes-Alpes department. With two thirds of the stages covered in ice and snow, all of the crews decided to opt for Michelin Pilot Alpin A4L/R1 studded tyres.

– The night was decidedly brief for the Citroën Racing mechanics, who worked hard to ensure that Stéphane Lefebvre and Gabin Moreau could return to action today. On Thursday evening, the no.8 C3 WRC crew had to stop on SS2 when their clutch failed after they had attempted to get out of a snow-covered ditch.

– Fifth after the short opening leg, Kris Meeke and Paul Nagle moved into second place after the day’s first stage, SS3. However, the crew went off the road on the next stage after sliding on a sheet of ice. With their suspension broken, they were unable to go any further.

– Never having encountered conditions like this before, Stéphane Lefebvre improved steadily as he completed more stages. Most notably, he set the fourth fastest time on SS5 and moved ahead of around fifty competitors during the course of the day. He ended the leg twelfth overall.

– Despite the tricky conditions, Craig Breen and Scott Martin produced a fine performance in their previous generation WRC. They seized fifth place from Dani Sordo on SS7, before then dropping back down a place after taking a bit of scenic route on the day’s final stage.