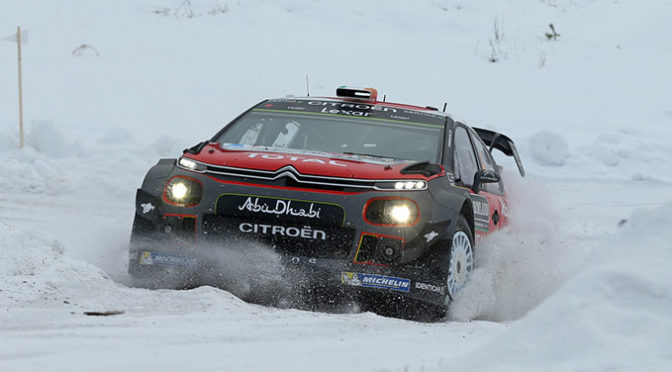 The second weekend of the 2017 World Rally Championship provided yet further evidence that it is one of the most open and unpredictable seasons in many years! In Sweden, the Citroën Total Abu Dhabi WRT met some of its targets thanks to its young drivers, Craig Breen and Stéphane Lefebvre. Whilst not underestimating the scale of the challenge ahead, the team undoubtedly made progress and is heading in the right direction ahead of the first round on gravel.

THE STORY OF THE RACE FOR THE C3 WRCs

The rally got underway on Thursday evening with the Karlstad super special stage. However, all the crews were waiting until Friday morning before switching to maximum attack in the forests of the Värmland.

The Citroën C3 WRCs were in impressive form at the start of the race, with Kris Meeke setting the second fastest time on SS2 and Craig Breen finishing third on SS3. At the mid-leg point, Kris was third overall whilst Craig was eighth, less than twenty seconds adrift of his team-mate.

On the second loop, Meeke had to contend with excessive wear on his Michelin X-Ice North 3 tyres and was unable to hang onto third place. Meanwhile, Breen struggled with the handling of his C3 WRC after damaging the front aero package when he hit a snow bank. He held onto eighth place, but dropped time to the drivers ahead.

“We clearly still have work to do to make the most of our car’s potential in certain conditions. On this surface, we were fast on the first pass on the stages,” noted Yves Matton, Citroën Racing Team Principal. “We still need to work out why our drivers were less comfortable on the second runs.”

On Saturday, Kris Meeke was unable to hide his frustration as the seconds slipped away. Despite driving well, the Brit dropped to fifth place. In the afternoon, he made a mistake on Vargåsen 2: after missing a corner, the C3 went off the road and fell into a snow-filled ditch. Spectators rushed to help but unfortunately, it took them eight minutes to get the car back on the road…

Craig enjoyed a more positive day. Avoiding the previous day’s mistakes, the Irishman profited in particular from the misfortune of other drivers to move up a few positions. As he returned to service and parc ferme in Torsby, he could be pleased to have ended day two into fifth overall. The rally concluded with a sprint finish on Sunday, with just three stages to complete. Craig Breen and Scott Martin looked to make sure of their result and therefore took no risks. They added a second fifth-place finish to the one secured in Monte-Carlo!

Twelfth overall, Kris Meeke and Paul Nagle nonetheless scored two points as they claimed fourth place on the Power Stage. With both Citroën C3 WRCs making it to the finish, Citroën Total Abu Dhabi WRT added 16 points to its tally in the Manufacturers’ World Championship.