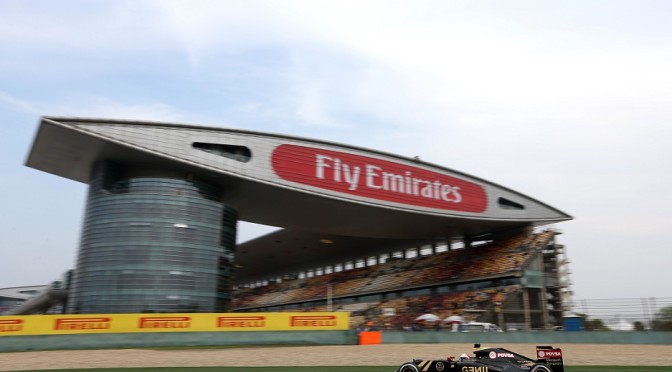 Aerodynamic performance is tested at the Chinese Grand Prix thanks to the circuit’s 1km back straight and its combination of sweeping turns. The back straight is a great place for overtaking, but not the only opportunity on the track. The layout’s demanding
corners test the Pirelli tyre whilst fans cheer on their heroes in the 24,000 capacity grandstand.
An addition to the calendar in 2004, the first sequence of corners on the track have been described as one of the hardest in Formula One as fast entry speeds are quickly discarded under heavy breaking due to a tightening track for almost 270° before quickly changing direction. The Chinese Grand Prix is host to the continuing growing fan base in Asia.

For China, Pirelli has made available the supersoft, soft and medium tyres.

Paddy Lowe, Chief Technical Officer: “The Shanghai International Circuit is the first track this season which will test the all-round performance of the car and so we will arguably see a truer measure of the relative performance of the cars within the new regulations. It is a great track with some demanding high-speed corners and a long back straight which is traditionally good for overtaking, but requires good set-up to ensure speed can be carried onto the straight. It is great to be heading to China as there is a growing fan base with more local fans each season showing remarkable dedication to the sport. It is also an important race for us understand where we are in the Championship to address the challenges for the season with our continued aim to improve and make progress.”

Felipe Massa: It’s always nice to go to China. I really like the track. It has a very old style, with many high speed corners and one of the longest straights in Formula One. It’s definitely a fun track to drive. I also love the Chinese fans. They have a lot of love and whenever I leave my hotel they’re always outside waiting! So I’m really looking forward to seeing them all again.

Lance Stroll: This will be my first time in mainland China, as in the past I have just been to Macau where I raced in F3. I don’t know a lot about the circuit. I have only done some simulator work on the track, so I still have to wait to see what it is like in reality. However, I have watched some of the races there so have an idea about the scale of the track. After Melbourne, which is a narrow track, I am going to change my approach a bit as it is a little more forgiving with the large run off areas. Having said that, I shall just prepare in the normal way as well as I can for the race.