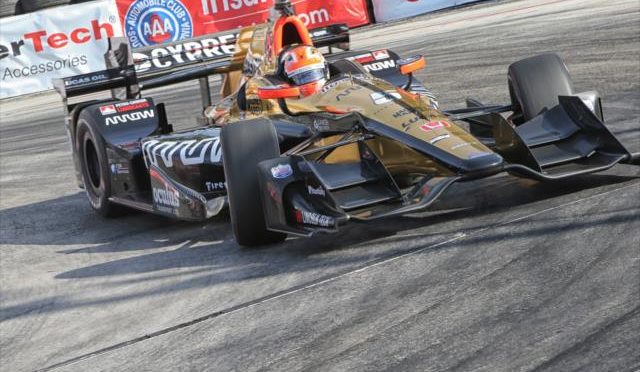 Hinchcliffe’s last win came at NOLA Motorsports Park in April 2015, a month before the crash caused when a suspension piece on the car broke at 220-plus mph on the Indianapolis Motor Speedway oval. Hinchcliffe returned to racing last season and captured the Indianapolis 500 pole position, but had yet to win another race until today.

“To finally do what was goal No. 1 when we set out at the start of the season, to get back into winner’s circle, to do so as early in the season as we have, as convincingly as we did, was great,” said Hinchcliffe, who recorded the fifth victory of his seven-year Verizon IndyCar Series career.

The Canadian and “Dancing with the Stars” Season 23 runner-up took the lead for good on the 63rd of 85 laps around the 1.968-mile, 11-turn temporary street circuit that hosted Indy cars for the 34th consecutive year. A full-course caution on the same lap to tow in the disabled car of Alexander Rossi helped Hinchcliffe save enough Sunoco E85R fuel to make it to the end and he held off Bourdais in a three-lap dash to the finish following another yellow when Ryan Hunter-Reay, who had been running second, stopped on course with an electrical issue.

“After Indy and personally me for Toronto, this is the biggest one to win,” Hinchcliffe said. “I’ve had a lot of luck here. We’ve been really quick here in the past and to finally get to victory lane here is more than I can put into words.

“This place has a lot of history, that’s what drivers really care about. The greatest of the greats have won here. Toronto, Indy and this place were on my bucket list to win before I die, and it’s nice to check one off.”

Bourdais, driving the No. 18 Trench Shoring Honda, recovered from rear wing damage sustained from debris when the cars of Graham Rahal and Charlie Kimball made contact on Lap 1. Coupled with his win March 12 in the Firestone Grand Prix of St. Petersburg, it gave Bourdais a 19-point lead over Hinchcliffe in the championship after two of 17 races.

“The fuel saving we could achieve today with the performance we had on the Honda was amazing,” said Bourdais, the four-time Indy car champion who won three straight Long Beach races from 2005-07. “I’ve always been pretty comfortable saving fuel and that one sort of came to us today.”

“It’s always good to get the first podium out of the way for the Captain,” Newgarden said of team owner Roger Penske. “It was a pleasure to drive this weekend. Verizon gives us great tools at Team Penske. It’s nice to get this one out of the way. Hopefully now we can hunt down some wins.”