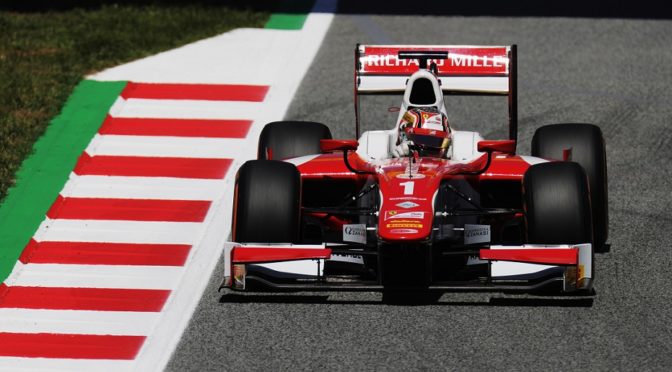 Charles Leclerc has topped this morning’s free practice session at the Circuit de Catalunya-Barcelona, setting the pace early on to grab the top spot despite close pressure in a busy session from Alexander Albon and Sergio Sette Camara.
The Ferrari Driver Academy man topped the timesheets with a lap of 1:29.974 a third of the way through the session, making the most of the warm and sunny conditions to grab P1 by just 0.042s from the Thai driver, reigniting last year’s GP3 title fight as the pair looked towards this afternoon’s vital qualifying session.
With the session opening under glorious conditions the teams wasted no time in getting their drivers on track, looking for any new information they could glean at a circuit where small margins will make a substantial difference, given the amount of testing time at the track they all have under their belts.
The Rapax pair of Johnny Cecotto and Nyck De Vries set the early pace, soon to be dispossessed by Nobuharu Matsushita and Artem Markelov, but when Albon set the pace in sectors 1 and 2 for the top time it looked like he had claimed the honours. But Leclerc grabbed them away a few minutes later with a clean lap of his own: the Monegasque driver didn’t top any sectors, but was close in the first 2 sectors and faster than the ART driver in the final one to nab the glory, with the remainder of the session assigned to race simulation work.
Behind the top three Jordan King, Louis Deletraz, Markelov, De Vries and Norman Nato were all within a second of the top spot and will be looking for more in this afternoon’s qualifying session, to be run in a just a few hours’ time.