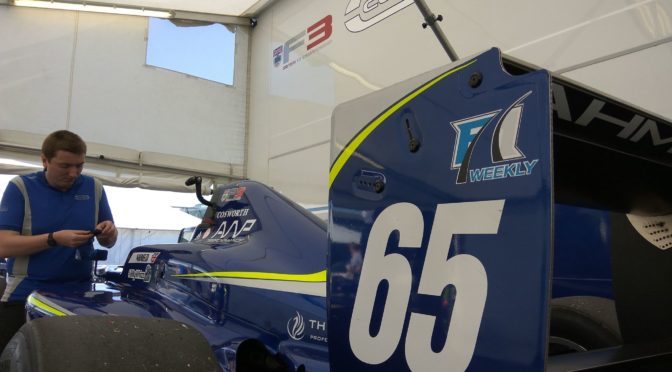 NASIR SHARES HIS RECENT TRIP TO THE PAU GRAND PRIX AND THE BRITISH F3 RACE AT SNETTERTON WHERE ENAAM AHMED GIVES F1W ANOTHER GREAT INTERVIEW, PLACES THE F1W LOGO ON HIS RACE CAR AND LEADS THE BRITISH F3 CHAMPIONSHIP DRIVERS STANDINGS WITH 241 POINTS.

Champion Enaam Ahmed returns to Carlin for an assault on the 2017 BRDC British Formula 3 Championship. The Brit stormed to the Autumn Trophy title with two victories from the three races held at Snetterton in October, and his partnership with the Surrey-based outfit will now continue into the year ahead as he looks to challenge for the main championship crown.

Ahmed graduated to single-seaters after a stellar karting career which saw him claim the CIK-FIA World and European KF Junior Karting Championship titles aged just 14. He then moved into MSA Formula for 2015 and finished the year as Rookie champion, before graduating to BRDC British Formula 3 for 2016 with Douglas Motorsport.

The 16-year-old enjoyed a successful season, scoring one victory and four other top-three results as he finished fifth in the overall standings. He then joined Carlin for the season ending, one round Duo BRDC British F3 Autumn Trophy which he emerged from victorious.

Ahmed said: “I am honoured to be joining Carlin for 2017. They gave me everything I needed for me to deliver in the BRDC British F3 Autumn Trophy so I am really looking forward to working with them in the main championship as I have some unfinished business to attend to!”