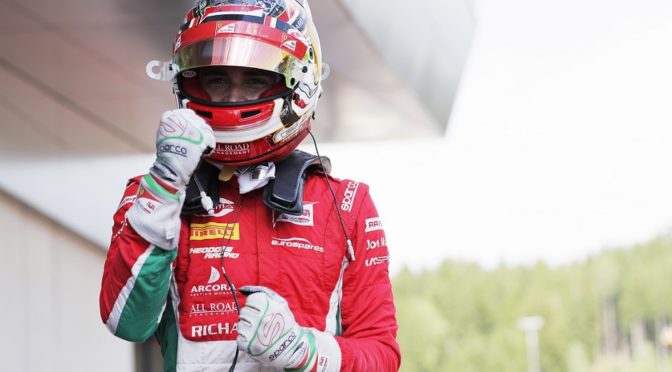 Charles Leclerc has extended his championship lead with a sparkling win in muggy conditions in this afternoon’s FIA Formula 2 feature race at the Red Bull Ring in Spielberg, Austria, dictating the pace throughout the race to record a convincing victory ahead of Nicholas Latifi and PREMA teammate Antonio Fuoco.
The Monegasque driver controlled the race right from the start, when Fuoco made a better initial getaway from P2 but Leclerc was quicker in the second phase and into the corner, leading the race once again as the rest of the field shook out between the pair. Championship contender Oliver Rowland made a poor getaway on the option tyres and was swamped into turn one, with the ART pair of Alexander Albon and Nobuharu Matsushita as well as DAMS teammate Latifi blasting past the British racer.
The PREMA pair swapped fastest laps as they pulled away from their pursuers, but Fuoco ultimately had no answer for his teammate’s pace as the gap grew between them. Latifi was the first of the option-shod drivers to pit, on lap 7, with his teammate coming in one lap later but emerging behind the Canadian, who had driven a great first stint but had no response when Rowland blasted inside him at turn on lap 13 for P8 on track, and a net podium if his strategy worked.
Leclerc, however, was unruffled, maintaining the gap back to Rowland the leader of the option drivers and a solid hand on a net victory. Rowland was doing what he could to make his strategy work, overtaking prime drivers and trying to close the gap, but it was to no avail: Fuoco pitted on lap 31 and emerged between the DAMS drivers, Leclerc came in a lap later and emerged ahead of Rowland, and when Matsushita pitted next time through the Ferrari Academy driver was back in P1.
Unfortunately the effort had taken a toll on Rowland’s tyres, allowing his rivals to regain a march on him: Fuoco got through the Briton on lap 33, Latifi dispatched his teammate 3 laps later and, remarkably given the age difference in their tyres, also pushed past Fuoco on lap 38 to form the podium: Leclerc slowed in the end but easily controlled the run to the line for a fine victory ahead of Latifi and Fuoco, with Rowland just unable to unseat the Italian for a podium. Albon and Matsushita were next across the line, running as they had all weekend, with Ralph Boschung an impressive 7th from P11 on the grid and Artem Markelov on the reverse pole from P14, ahead of Jordan King and Sean Gelael, who mugged Robert Visiou for the final point on the final lap.