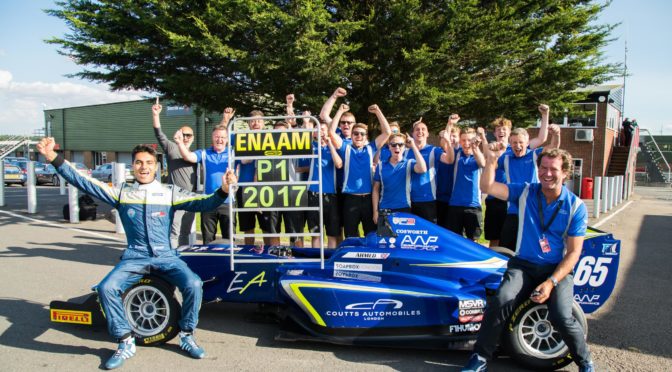 Enaam Ahmed, 17-year-old British racing sensation, started the season like Nico Rosberg last year, winning the first four races of the season. And will finish off the season in September having already matched Senna’s number of wins in this prestigious championship.

Next stop; Donington. Next target; Jan Magnussen’s record of 14 wins from the 1994 British F3 season.

Enaam was fifth in the championship in 2016 and, after winning the Autumn Trophy towards the end of last year, was one of the pre-season favorites to lift the 2017 title. What he did not expect, nor did the competition, was the dominating trend he established right from the moment the lights went out for the season opener at Oulton Park in mid-April.

The winning momentum continued into round 2 at the Rockingham ‘roval’ where Enaam won the opening race of the weekend. American racer Cameron Das scored his maiden win in Race 2 and local lad Ben Hingeley did likewise in Race 3. Enaam was 8th in both and left Rockingham with a 15-point lead in the championship over his Carlin teammate Das.

Round 3 was in beautiful Norfolk, Lotus-country, on Memorial Day weekend. F1Weekly was in full force with Mr Peter Brazier, now at the wheel of his new European e-support vehicle, a mighty fine and electrifying Tesla and Dr Mark Farrington joining yours truly for some high performance and pappadums at Jonathan Palmer-owned Snetterton circuit. The high banks around the track offer an excellent view of most of the racing action. We were all delighted to see Enaam’s car – now proudly displaying F1W logo on the rear wing – take two wins and a sixth to stretch his lead over Das to 44 points.

Silverstone – Home of British Motorsports – was the scene of Round 4 in June. Toby Sowery, like Enaam in his second year in the series, almost did a triple play; winning two races and finishing second to his Fortec teammate, Hingeley, in the other.

This has been the only weekend so far this season where Enaam did not score a victory, but two podium finishes and a fifth saw him extend his lead in the championship to 58 points.

James Pull, also part of the Carlin brigade, now assumed second place in the title race after finishing all three races at the ‘Stone on podium.

The championship traveled outside jolly olde England in July for battle in the Ardennes Forest at the majestic Spa-Francorchamps.

Enaam came close to his second triple play of the season, missing out on victory to Hingeley in the opening race of the weekend by just over 1s. He then stamped his authority by winning the remaining two races and establishing a comfortable 82-point cushion over the new second man in the standings, Toby Sowery.

Round 6 of the series took competitors to the Brands hatch Grand Prix circuit, located in beautiful Kent countryside. This is the circuit where “our Nige” scored his first long awaited Formula 1 victory way back in 1985.

Race 1 was a case of rain and reign. Enaam started from pole and led the race with fellow front-row starter James Paul staying in close contact in second place. Raindrops on the track slowed the field down while some skidded off the track. Heavy downpour brought the red flag and the race was declared over after eight laps, giving Enaam 9 wins and counting.

After claiming third in the second race, normal service was resumed and he was back on top step of the podium in the third and final race of the weekend. Cruising home to London town Enaam enjoyed a substantial lead of 106 points over James Pull in second, and felt confident his first motor racing championship was coming his way before the final round at Donington in late September.

Enaam sealed the deal at Snetterton last Sunday, doing double the pleasure by winning the opening and final race of the weekend, plus fifth in Race 2. Title secured, job well done.

F1Weekly extends our congratulations to the new 2017 BRDC British F3 Champion and to the entire Trevor Carlin crew.

E words: “I’ve been in this championship for two years, and it means a lot to me to win the title. It’s been a great Championship, everyone at MSV (Motor Sport Vision) and the BRDC (British Racing Drivers Club) and everyone involved has done a really good job with the series….and specially to do with Carlin as they’re such a prestigious team. it wouldn’t have been possible without the people around me; my mum and dad, my coach Roberto, Andy from AW and so many other people. I’m really thankful and now I move on to the next challenge, it’s pretty amazing to be an F3 champion alongside some of the greatest names of Motorsport.”

It was success in the British F3 that launched the careers of Fittipaldi, Piquet, Senna and Hakkinen into the Formula 1 orbit.