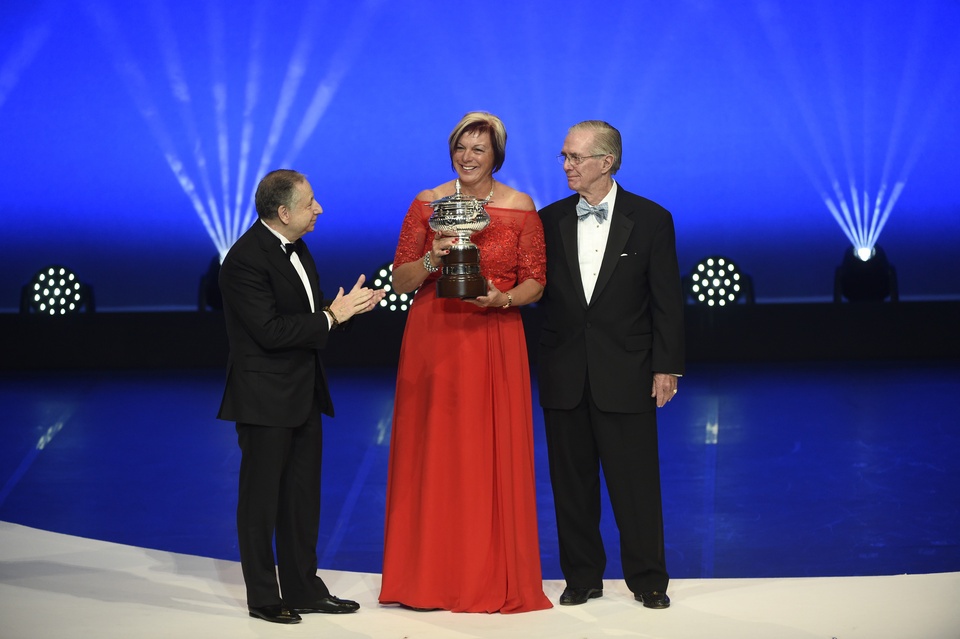 MONTEREY, Calif., December 11, 2017 — The FIA (Federation Internationale de l’Automobile), the world’s premier motorsport governing body, awarded world championship trophies at its annual gala and prize giving ceremony Dec. 8 at the Palace of Versailles. Among the trophy presentations was the FIA Members Heritage Cup, which was bestowed to the Sports Car Racing Association of the Monterey Peninsula (SCRAMP) in recognition of the Rolex Monterey Motorsports Reunion.

SCRAMP’s Gill Campbell accepted the presentation from FIA President Jean Todt and U.S. FIA dignitary Nick Craw during the all-star ceremony. This is the first time the FIA Members Heritage Cup has been awarded to an event in the United States.

The Rolex Monterey Motorsports Reunion was nominated by Craw as an example of an organization that maintains the highest standards of authenticity and preservation in the cars that are accepted and in the dedicated and superb organization of the event that attracts worldwide appeal. This year, the Rolex Monterey Motorsports Reunion eschewed a featured marque and instead celebrated the 60th anniversary of Laguna Seca. More than 500 race cars competed and the paddock display was capped by the Racing Through the Decades display that featured 12 significant race cars and bikes with ties to the iconic road course, including the Ferrari 500 Testa Rossa that Pete Lovely drove to the inaugural race in 1957.

“To have 28 international FIA representatives (one from each country) vote and recognize SCRAMP for such an honor is testament to the passion and professionalism of SCRAMP staff, volunteers, sponsors and the County of Monterey,” remarked Campbell. “It is through the dedication and enthusiasm from each participant who shares his or her cars on the track and in the paddock that makes the Rolex Monterey Motorsports Reunion so special internationally.”

The highlight of the annual gala show was the presentation of the FIA Formula One World Drivers’ Championship Trophy to Lewis Hamilton. The Mercedes driver lifted the World Championship trophy for the fourth time in his career, a remarkable feat that puts him level with French Formula One legend Alain Prost and his great rival for this year’s title, German driver Sebastian Vettel of Ferrari.

“Recognition from international peers is humbling,” added Campbell. “And to receive such an honor in our 60th anniversary year and before more than 800 of the world’s motorsports elite in attendance will never be forgotten.”