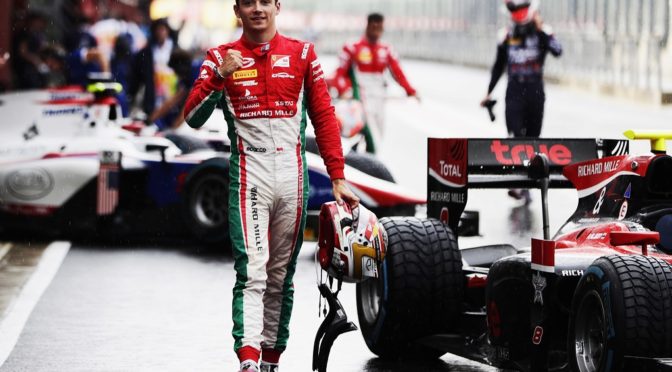 CLARK AND NASIR REALIZE KUBICA HAS NO CHANCE AND SUGGEST LOT’S OF RUSSIAN RUBLES ARE ON THE WAY TO THE WILLIAMS F1 TEAM! F1W IS PREPARING FOR THE DAYTONA 24 HOURS WHICH COULD BE AN INTERVIEW BONANZA!! AND THIS WEEKS INTERVIEW IS WITH CHARLES LECLERC FROM LAS VEGAS 2012 NOW 2018 F1 DRIVER FOR SAUBER.

Leclerc was a childhood friend of Jules Bianchi and began karting at the track managed by Bianchi’s father in Brignoles. Like Bianchi, Leclerc joined the ARM management company headed by Nicolas Todt.

In 2012, at the wheel of an ART GP Kart, Charles won the WSK title, as well as finishing runner-up in the European and World championships.

In 2013, Charles was again runner-up in the European series and finished second in the Under 18 category with the Fortec Motorsport team, with whom he was also second in the 2014 ALPS Championship.

He was best rookie on his Formula 3 debut in 2015, racing with Van Amersfoot Racing, finishing fourth in the championship. In 2016, he joins the Ferrari Driver Academy, as well as racing in GP3 for ART Grand Prix, with another role as development driver for Scuderia Ferrari. He won the Formula 2 Championship in 2017.

He will drive for Sauber in the 2018 FIA Formula One World Championship.