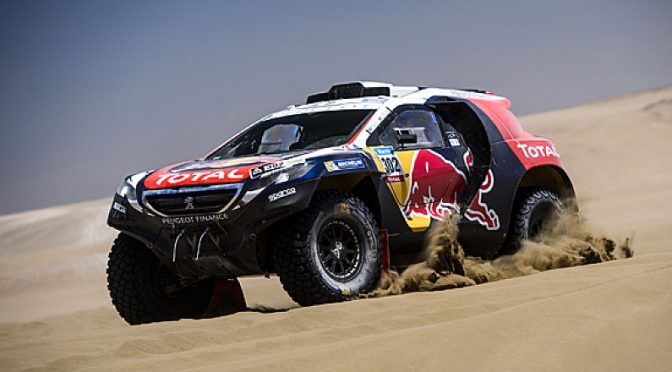 PEUGEOT LION ROAR WHILST SOME DAKAR DREAMS TURN TO DUST

The second stage of the 2018 Dakar Rally brought with it some of the biggest challenges of the year and dealt knockout blows to a few high-profile contestants. Taking each one of the Peruvian dunes in their stride were defending car race champions Team Peugeot Total as they locked out the stage two podium.

Opening the course today was the Toyota Hilux of Nasser Al-Attiyah (QAT)/Mathieu Baumel (FRA) who were relying on their sand expertise to grow an even bigger gap at the front of the race. However, a bout of ‘sand dune sickness’ for Baumel hampered the charge and this morning’s leading duo ended the day falling back in the overall standings.

“The reason we lose a lot of time is because Mathieu got sick from the beginning and I had to take care about him.” – Nasser Al-Attiyah

The big winners in the car category on stage two turned out to be defending champions Team Peugeot Total who now have Cyril Despres (FRA)/David Castera (FRA) leading the race after they clocked today’s fastest time.

“This was a complicated stage with very high dunes, very hostile terrain. If you made mistakes out there you could lose a lot of time.” – Cyril Despres

“It was a real Dakar special, where you have to keep everything under control. The race starts now.” – Stéphane Peterhansel

Al-Attiyah may now be over 12 minutes behind new race leader Despres, but he doesn’t have to look too far around the bivouac to see how much worse his day could have been. Bryce Menzies (USA) and co-driver Pete Mortensen (USA) had made an encouraging start to their Dakar debut with a Top 5 placing on the opening stage. This good work counted for nothing though when the American pair’s MINI rolled out of the race just six kilometres into today’s special stage.

“When we hit the bump it just unloaded the rear and it went to the front bumper, we flipped six or seven times. It was not what I wanted to do at my first Dakar and I’m feeling really bad for the whole team.” – Bryce Menzies

“We had three places where we had to turn around and look for the waypoint. It was really tricky.”– Giniel de Villiers