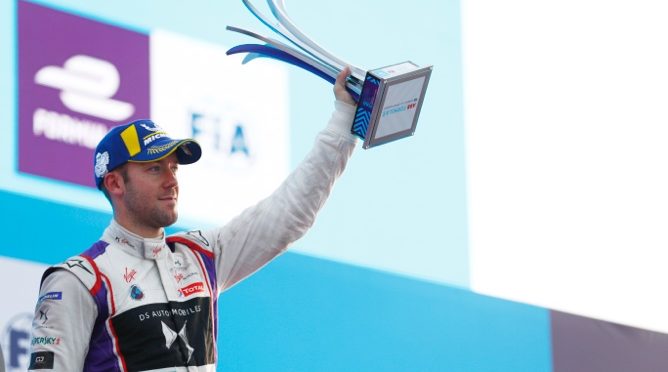 CLARK AND NASIR REVIEW THE 2017 FORMULA 1 SEASON CAUSING MORE GRIEF FOR THE HOST! WE HAVE ANOTHER INSTALLMENT OF “LOOSH ON THE LOOSE” AND HERE IS AN UPDATE ON THE FORMULA E RACE IN MARRAKESH…

PODIUM FOR SAM BIRD IN MARRAKESH

After maintaining their qualifying positions off the start line, Bird was challenging Sebastien Buemi for the lead in the opening laps, whilst Lynn was looking strong in sixth until he was hit from behind by Daniel Abt at Turn 1. The German driver was subsequently penalised, but Lynn – now right down the order in the 33 lap race – was able to produce a strong comeback drive to end the day ninth.

Meanwhile, Bird was unable to hold on to his P2 slot from a charging Felix Rosenqvist but came home to pick up the 11th podium finish of his Formula E career and remain a strong title contender heading into the next rounds in Chile.

Sam Bird said: “Not everything went the way we wanted it to this weekend, but third place is still a strong result for me and the team, with yet more championship points. It’s a good platform for us build on for the races ahead and we hope it continues.”

Alex Lynn said: “This weekend promised a lot but sadly we didn’t come away with all the points we deserved. We qualified well and were in the fight during the race but unfortunately it was ruined by another driver which put paid to what we should have scored.”

Team Principal Alex Tai commented: “Sam, Alex and the whole team performed fantastic today on a track that was always going to be tough on energy consumption. To have always finished in the points – together with a win and a podium – in the first three races, just shows what a great position we’re in heading into the next race in Santiago.”

DS Performance Director Xavier Mestelan Pinon added: “It was great to see Sam on the podium today and another strong result for the team. The achievements confirm the efficiency and performance of our car, and is reward for all the hard work the team has done to prepare for this event.”

The all-electric Formula E championship is next in action on February 3 at the inaugural Santiago E-Prix. For more information on the DS Virgin Racing Formula E Team, visit: http://map.ds-virginracing.com/