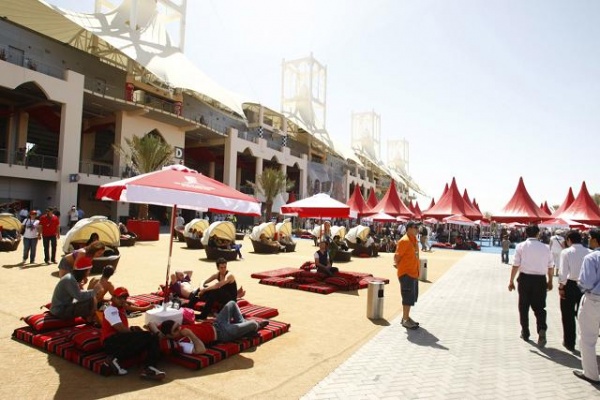 CLARK AND NASIR REVIEW THE GRAND PRIX OF BAHRAIN AND WONDER WHAT COULD HAVE BEEN IF MAD MAX HAD STAYED IN THE RACE! WE HAVE A BAHRAIN GOODY BAG AND HERE ARE SOME THOUGHTS FROM FERRARI…

Seb first once again, Kimi retires after an accident in the pits leaves a mechanic injured

Sakhir – You always fight to win, but not all victories are the same and this one is bittersweet. For the second time in as many races, Sebastian Vettel won with Scuderia Ferrari, but at the moment, the thoughts of everyone in the team are with the mechanic who was injured during Kimi Raikkonen’s pit stop, the Finn stopping and retiring immediately after in pit lane. As for the Grand Prix, it was closely contested right down to the final corner and the win came courtesy of a well thought out strategy and the abilities of the driver who managed to make a set of Soft tyres last 38 laps no less, on a track that is one of the hardest on tyres.

Off an all-red front row, Seb made the most of pole, while Kimi who was starting on the dirty side of the track was attacked and passed by Bottas. The virtual safety car was soon deployed, when Verstappen had a puncture as a result of a coming together with Hamilton in the middle of the pack. The race got underway again on lap 4, with Sebastian quickest, a couple of seconds ahead of Bottas. In the garage, an analysis of our speed in individual corners and that of our rivals was taking place as well as working out how much fuel had been saved while the race was neutralised A long distance duel with Hamilton thus began, the Englishman fourth, 15 seconds adrift, but running the harder tyre: Supersoft for the SF71H and Soft for the Mercedes.

19 laps, one third distance, Seb pitted as planned and fitted the yellow-banded Softs. The order was Bottas, Raikkonen, Hamilton and Vettel. Next time round, Kimi did the same. Vettel pushed hard and Bottas, emerging from pit lane on the Mediums, lost ground. On lap 25, Seb was in DRS range in his duel with Hamilton, closing to under a second. It was time for wheel to wheel combat and Seb didn’t lose any time, diving inside his rival under braking at the start of lap 26. Hamilton changed tyres immediately, also fitting the Prime Medium. Seb had 5” in hand over Bottas, who was aiming to finish the race doing one less stop. Sebastian lost time with backmarkers but Kimi made the most of the traffic to close on his fellow countryman.

Lap 36 and something you never want to see happened: Kimi came in to change tyres and as he drove off, the mechanic on the left rear wheel was knocked over. The number 7 car stopped immediately, Seb stayed out on track, but at this time, strategy, racing, counted for much less and with one of our own in the medical centre, the thoughts of everyone in the team went out to him. Out on track, Bottas pursued Sebastian for 20 laps, but our driver never gave him room, even though his tyres were finished. That is Ferrari and that, Francesco, is for you. Hurry back.