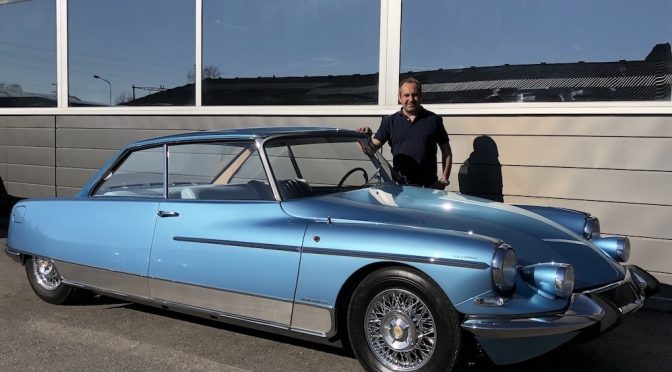 This year, for the first time ever, Citroën will grace the 18th fairway as a featured marque at the 2018 Pebble Beach Concours d’Elegance on August 26th. The Pebble Beach Tour d’Elegance poster, painted by Barry Rowe, commemorates this historic moment.

“Interest in Citroën among collectors has seen exponential growth in recent years, and the Concours is pleased to showcase custom coachwork Citroëns that offer the best of French technology and design,” said Concours Chairman Sandra Button.

Citroën’s iconic spaceship-like DS made its debut at the 1955 Paris Auto Show, where the unmistakable sheet metal garnered over 80,000 orders by the end of the week. The DS platform was far ahead of its time, featuring hydraulic systems for the brakes, steering, and transmission, and most notably a revolutionary hydro-pneumatic suspension. This specific advancement in automotive technology made the DS one of the most stable autobahn cruisers ever created, and allowed for self-leveling, decreased dive under braking, jack-less tire changes—the car could raise an individual wheel—and an unparalleled luxurious ride. Moreover, the unique style of the DS made it an attractive canvas for coachbuilders such as Henri Chapron; custom Citroëns subsequently sustained the art into the 1970s.

Citroën enthusiast Jeffrey Fisher likens Citroëns to couturier dresses—“because they featured some of the highest number of interior and exterior permutations for a car ever.” The Tour poster features three cars from Fisher’s collection that illustrate the progression of the Citroën DS from middle class family car to postwar work of art.

At the forefront of the poster is the two-tone blue 1966 Citroën DS 21 Chapron Le Léman Coupé, one of roughly 130 Chapron Coupés produced, and one of about 24 with the Le Léman specific roofline. This very car (chassis no. 4350020) graced the stage at the 1966 Geneva Motor Show and represents the pinnacle of postwar Citroën custom coachwork. The green 1967 DS 21 Chapron Cabriolet d’Usine was transformed to convertible specification straight from the factory and sold new for roughly twice the cost of a conventional saloon. The Jaune Jonquille, or Daffodil Yellow, DS 19 exemplifies the essence of the early, groundbreaking DS saloons. All three of these Citroëns have been fully restored by renowned Citroën expert Vincent Crescia, who currently operates out of the very building that housed his father’s Citroën dealership years ago.