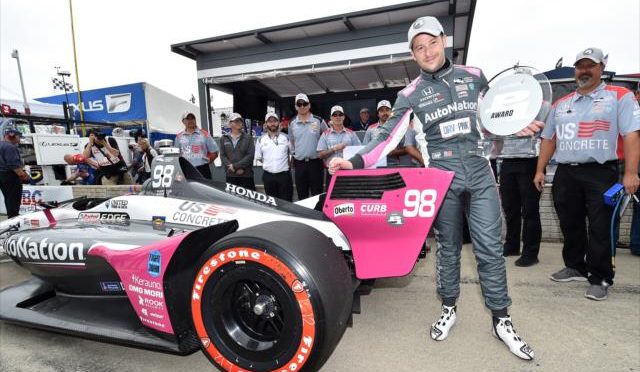 DETROIT (Saturday, June 2, 2018)  – Marco Andretti became the seventh different Verizon P1 Award winner in as many Verizon IndyCar Series races this season when he captured the pole position today in qualifying for the first race of the Chevrolet Detroit Grand Prix presented by Lear.

Driving the No. 98 AutoNation/Curb Honda for Andretti Herta Autosport with Curb-Agajanian, the third-generation Indy car driver sizzled around the Raceway at Belle Isle Park temporary street course in 1 minute, 14.8514 seconds (113.024 mph) on his last lap to collect the fifth pole position of his 13-year career and first since Pocono Raceway in July 2013.

Andretti will lead the field to the green flag in this afternoon’s race. It marks the first pole for the 31-year-old on a road or street circuit.

“I’m definitely embarrassed to say that this is my first (road/street pole), but I’ve been outside pole so many times on road and street courses,” Andretti said. “Extremely pleased to execute today. I think yesterday I knew we had the speed … so I knew we had it in the car. All I had to do was execute, and I was able to do that instead of just talking, ‘Oh we would have been first.’ Now we are.”

Andretti will look to erase an even longer drought this afternoon. He hasn’t won a race since 2011 at Iowa Speedway, a stretch of 115 races.

“It’s not easy to be first in anything,” he said. “It’s been a challenge. The win column is what’s really been bugging me, for sure. Starting first is awesome, but I definitely want to win the race. We have a great shot at doing that today. As soon as I knew we won pole, the switch in my brain flipped to win.”

In the unique qualifying format for the Detroit doubleheader weekend, the 23-car field was split into two groups – with each group receiving 12 minutes of track time on the 2.35-mile, 14-turn circuit. Scott Dixon, in the No. 9 PNC Bank Chip Ganassi Racing Honda, was quickest in the first group with a lap of 1:15.4186 (112.174 mph) and will start alongside Andretti on the front row.