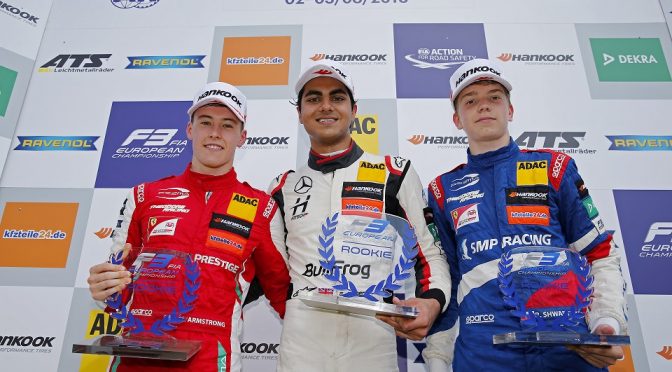 At the start of the race, things already went to plan for Enaam Ahmed, who claimed the lead on the first metres. Marcus Armstrong returned from the opening lap in second place ahead of Daniel Ticktum. Until the fifth lap, the Red Bull-backed Brit held on to his position, but then retired due to a brake issue, handing third place to Alex Palou.

Meanwhile, Ahmed was able to extend his lead while the positions behind him were also largely taken. Jehan Daruvala (Carlin) in sixth place, on the other hand, couldn’t afford himself any mistakes as his rivals Mick Schumacher (PREMA Theodore Racing), Ferdinand Habsburg (Carlin) and Sacha Fenestraz (Carlin) were right behind him for a long time. The Force India junior driver withstood the pressure and crossed the finish line in sixth place from Schumacher, Habsburg, Fenestraz and Ben Hingeley (Hitech Bullfrog GP).

Enaam Ahmed (Hitech Bullfrog GP): “This success is a great feeling. I didn’t expect to win already on my second weekend of racing. The level in the FIA Formula 3 European Championship is very high and all the drivers are really good. Therefore, I had a really intense preparation for the season together with my driver coach during the winter, which obviously was good. In this race, my start wasn’t as good as Marcus’s, but still good enough to take the lead. Then, I didn’t take any big risks anymore, because I didn’t want to make any mistakes. Apart from that, it was very hot. I don’t particularly like racing in hot conditions.”

Marcus Armstrong (PREMA Theodore Racing): “My start was good and I was right behind Enaam at the beginning. I was a bit surprised myself that I was so fast at this stage. Then, Enaam managed to pull a slight gap and closing up here is very difficult.”

Alex Palou (Hitech Bullfrog GP): “Finally, I managed to make a normal start. So far, my starts were never really good. The performance of the car was never a problem, only the starts. Now, however, we have solved this problem. That is a good feeling.”