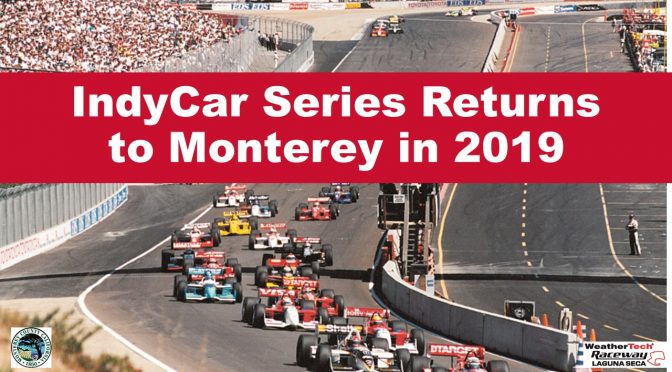 The three-year agreement, approved today by the Monterey County Board of Supervisors overseeing operation of the facility, calls for Laguna Seca to be the host site of the final race of the 2019 Verizon IndyCar Series season. Next year’s race weekend will be Sept. 20-22. The remainder of the series schedule will be announced later.

Mark Miles, president and CEO of Hulman & Company, which owns INDYCAR and Indianapolis Motor Speedway, praised the agreement that returns Indy car racing to the track.

“I can’t imagine a more attractive destination location for INDYCAR’s season finale,” Miles said. “Monterey is a place people want to be, and we will bring all of our guests. I think it’s a great choice for us.”

The 22 previous Indy car races at Laguna Seca have seen their share of the sport’s greats drive to victory. Bobby Rahal won four consecutive years at Laguna Seca and Danny Sullivan, Michael Andretti, Paul Tracy, Bryan Herta and Patrick Carpentier each won twice. One of the most famous racing moments in Indy car history occurred at Laguna Seca in 1996, when Alex Zanardi completed a daring last-lap pass of Herta in the famous downhill Corkscrew turn to get the race win.

“It’s great news, but I might be biased,” Rahal, now co-owner of the Rahal Letterman Lanigan Racing team that competes in the Verizon IndyCar Series, said of the agreement. “I personally won four Indy car races there and won my first Can-Am race there. Our Indy car team won with Bryan Herta and Max Papis and our sports car team won IMSA races there, so I would almost bet you that Laguna Seca is the site of more victories for me as a driver and team owner combined of any track I’ve ever raced on.

“There is nothing better than the Monterey Bay area, and it’s a great circuit that always drew great crowds, so I’m thrilled to have Indy car racing coming back to a circuit I love so much. We will put on a good show, for sure.”

“The return of INDYCAR to its spiritual road racing home of Laguna Seca is a tremendous honor and testament to the appeal of Monterey, and through the support of the County of Monterey will provide a significant economic benefit to our area businesses,” said Timothy McGrane, CEO of WeatherTech Raceway Laguna Seca. “We are looking forward to creating more memories in race fans’ minds like Bobby Rahal’s four consecutive Indy car wins from 1984-1987, Mario Andretti’s farewell race in 1994 and Alex Zanardi’s last-lap overtaking of Bryan Herta in the Corkscrew in 1996 that simply became known as ‘The Pass.’”

NBC Sports Group has secured exclusive domestic television and digital media rights for INDYCAR races beginning in 2019. Jon Miller, president of programming for NBC Sports and NBCSN, agreed that Laguna Seca is an ideal venue to close out the schedule.

“We commend INDYCAR for returning to Laguna Seca, a historic track and an inspired place for the 2019 season finale,” Miller said. “The 2019 season will be our first as the exclusive media rights partner of INDYCAR, and we could not be more pleased to broadcast the championship from beautiful Monterey.”