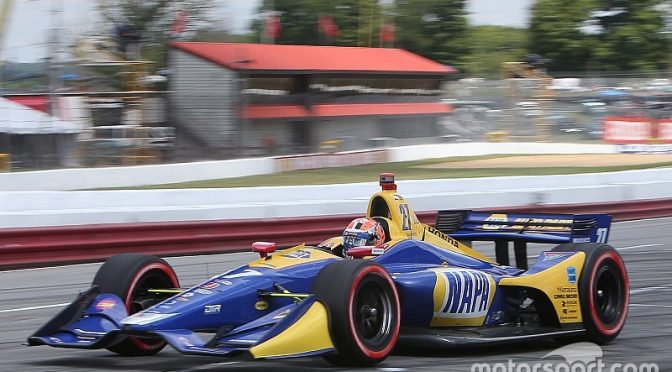 LEXINGTON, Ohio (Sunday, July 29, 2018) – About the only wheel Alexander Rossi turned wrong in Sunday’s Honda Indy 200 at Mid-Ohio came when he attempted a victory doughnut in the No. 27 NAPA AUTO PARTS Honda. His car slid off track and became stuck in the grass.

Otherwise it was an exceptional day for the Andretti Autosport driver, who won the Verizon IndyCar Series race at Mid-Ohio Sports Car Course by 12.8285 seconds. Rossi was the only driver in the 24-car field to complete the 90-lap race in two pit stops, while everyone else needed three.

It made all the difference as Rossi picked up his fourth career win and second of the season. Rossi also advanced one position in the championship standings, moving into second place, 46 points behind Scott Dixon after 13 of 17 races.

“It’s what we needed. We said coming into this weekend that we have to execute for five (race) weekends in a row; this is the start of that, hopefully,” Rossi said. “The NAPA Andretti team was so on it today. They gave me an amazing race car, and this one’s for them.”

Starting from the pole position after winning the Verizon P1 Award in Saturday qualifying, Rossi led 66 laps around Mid-Ohio’s 2.258-mile, 13-turn permanent road course. After achieving the necessary fuel mileage early in the race, he and strategist Rob Edwards decided to gamble on the two-stop strategy.

He pitted for Sunoco E85 ethanol and Firestone tires on Laps 29 and 59, running the final 31 laps (70 miles) on a single tank. When Schmidt Peterson Motorsports’ Robert Wickens made his third pit stop from the lead on Lap 65, Rossi assumed first place and was never threatened.

“It was great strategy all day,” Rossi said. “We knew we could two-stop it if we committed early, and that’s what we did. Great fuel mileage from Honda, great tire life from Firestone, so really an all-around perfect day.

“On races like that, you’ve just got to be really patient. It’s hard sometimes, but Rob is a very calming force and just talked me through it, and we were able to manage it. We were planning on seeing if we could hit a (fuel) number. Then if we could, we were going to do two stops. It was a little bit up to me to see if we could manage it. When we were able to hit it pretty easily, then, yeah, we committed.”

The victory was No. 60 for Andretti Autosport in Indy car competition, but its first at Mid-Ohio.

Wickens, the series rookie driving the No. 6 Lucas Oil SPM Honda, finished second to equal his best result set at ISM Raceway in the second race of the season. Wickens now has seven top-five finishes this season and is solidly in sixth place in the standings.

“We stuck to our guns, and I thought our (three-stop) strategy worked well,” Wickens said. “The problem is, on my third stint, I just got stuck in a whole gaggle of cars. Unfortunately, they were on reds (Firestone alternate tires) and I was on black (primary tires), and I couldn’t make it through and just lost loads of time. I was probably losing about a second a lap for a good 10-15 laps.

Dixon, the five-time Mid-Ohio winner driving the No. 9 PNC Bank Chip Ganassi Racing Honda, made career start No. 300 and finished fifth. Dixon, third on the all-time Indy car wins list with 44, has now placed in the top five in exactly half of his races.

With 150 top-fives, Dixon moved ahead of A.J. Foyt and alone into second place in Indy car history, trailing only Mario Andretti (194).

“Basically, a frustrating day,” Dixon said after seeing his points lead shrink by 16. “I think the car had some good speed. We were really quick early on in a stint, (then) we kind of faded a little bit. The track condition was just not great.

“We would pit and one of the cars in front of us, or right around us, would pit, too, and we’d fall behind them and it just kind of put us back. It was one of those days where one little, tiny move could have jumped us another two or three spots.”