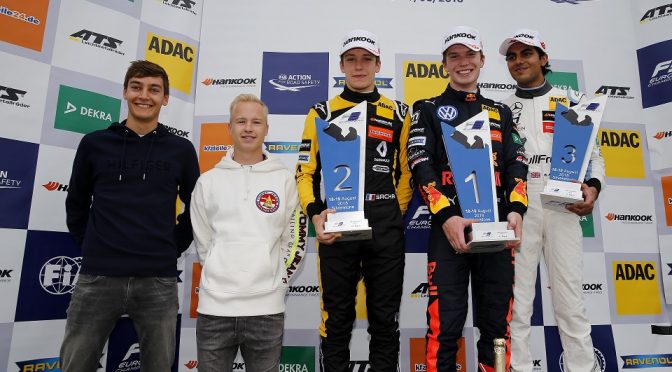 A HOME WIN FOR DANIEL TICKTUM

Daniel Ticktum (Motopark) has won the first of this weekend’s three FIA Formula 3 European Championship races at the 5.901 kilometres long Silverstone Circuit and thus also took over the lead in the drivers’ standings. Sacha Fenestraz (Carlin) was second across the finish line from Enaam Ahmed (Hitech Bullfrog GP). Rookie driver Marcus Armstrong (PREMA Theodore Racing), who came to Silverstone as the points’ leader, finished sixth in the 16th race of the FIA Formula 3 European Championship season.

Sacha Fenestraz took the lead at the start. Initially, Guanyu Zhou (PREMA Theodore Racing) was behind him, but the Chinese lost second place to Daniel Ticktum on the opening lap already. In the opening stages of the race, Fenestraz thus led from Ticktum, Zhou and Mick Schumacher (PREMA Theodore Racing), while there were some position fights in the midfield. For instance, fifth-placed Jonathan Aberdein (Motopark) couldn’t make any mistakes as Enaam Ahmed, Jüri Vips (Motopark) and Marcus Armstrong were following closely in his slipstream.

After five laps, Aberdein had closed the gap to Schumacher who, in turn, was no longer able to keep up with the drivers in front of him. One lap later, the German retired with a puncture and Aberdein inherited fourth place.

Out in front, Ticktum overtook Fenestraz for the lead with an exciting duel on lap 15 and then drove an undisputed victory home. Zhou retired with a puncture just a little bit later, which promoted Aberdein to third. However, he wasn’t able to bring this position home: following a full-course yellow (FCY) after Ralf Aron (PREMA Theodore Racing) had spun, he dropped back to fifth behind Amhed and Vips. Behind the South African, Marcus Armstrong, Alex Palou (Hitech Bullfrog GP), Robert Shvartzman (PREMA Theodore Racing), Jehan Daruvala (Carlin) and Fabio Scherer (Motopark) completed the top ten.

Daniel Ticktum (Motopark): “Winning on home soil is a great feeling, I am very happy. Today, all drivers in the top three had a similar speed, so I knew that it was going to be difficult. Therefore, I had to use every chance. Early on, I managed to overtake Guanyu on the outside and towards the end I benefited from the fact that Sacha’s tyres degraded. Now, I am leading the drivers’ standings again, but I am still working from race to race. When I would be thinking too much about a possible title win, I would be putting myself under pressure too much.”

Sacha Fenstraz (Carlin): “It is nice to be back on the podium after such a long time, but I really wanted to win, particularly after starting from pole position. I had to push hard in the first laps, so that my tyres weren’t very good anymore in the closing stages. Otherwise, I probably could have made it more difficult for Daniel to overtake me.”

Enaam Ahmed (Hitech Bullfrog GP): “I am happy to finally be back on the podium. On the past weekends, we were slightly lacking speed, because other teams like Motopark and Prema developed quicker. Now, we have also made a step ahead. On the opening lap of the race, I was able to make up some positions. After the FCY, I think I was more awake than Jonathan Aberdein, so that I could overtake him as well.”